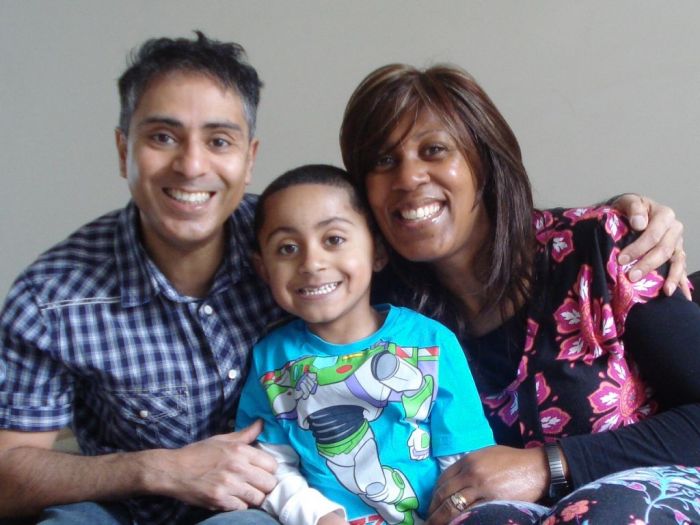 What’s life like if you see things a little bit differently from everyone else? We speak to one mum about her family’s experience…

Five-year-old Jamal is a lot like other boys his age. He likes singing, playing tricks on his mum and dad and he’s constantly attached to his iPad, playing games.

What makes Jamal different, however, is the way he sees the world.

“When Jamal was about nine months old, we had some friends come round with their child who was pulling himself up and making attempts to walk,” Jamal’s mum Anetta Moreno explains. “We could leave Jamal in the middle of the room, come back and he hadn’t moved at all. We’d move toys away from him and we’d get nothing. That’s when I started to worry.”

Eventually, Anetta and husband Toni, who are from Manchester, took Jamal to their GP. They were referred onto the local paediatric department where, after numerous assessments, days of observation and tests, Jamal was diagnosed at the age of three with high-functioning autism, dyspraxia and severe sensory processing disorder, as well as having complex health needs which have affected his development. All of these combine to affect the way in which Jamal learns new skills, socialises and communicates.

Anetta confesses that since Jamal’s diagnosis, it’s been a tough journey which has taken a lot of work.

“We’ve got guidelines and books, but what has really helped us is getting to know our own child,” Anetta says. “For instance, Jamal used to self-injure. You hear that children on the spectrum hit themselves, but it wasn’t true in Jamal’s case – it turns out that he has a lot of gastro-intestinal dysfunction so self-injuring behaviour was actually pain diversion. You really have to nurture them and get to know them. They’re still children, they’re still individuals, and if you get to know them, I think you can bring out the best in them.”

This has been Anetta’s mantra for the last two years. Upon realising how much care Jamal would need, she gave up work to focus her efforts on caring for her son.

“Getting that diagnosis completely alters your parenting approach,” Anetta admits. “You can’t even begin to tell other people how many hours you spend to get your child to achieve the small milestones that other people take for granted. It sounds really weird, but I was working with him for hours – it was like a programme of development. What I did to get Jamal to where he is now took literally 18 hours a day. I know parents who spend less than an hour a day with their child, and their child hits all their milestones. Whereas I spent hours just trying to get Jamal to feed the ducks or chase pigeons.”

Through constant work and making changes to things like Jamal’s diet – he is on a gluten-free/casein-free diet – Anetta has noticed big changes in her son. Attending a local special school, Jamal is progressing well. He comes home from class and tells his parents all about his day, something doctors said he would never do.

The family also receive four hours’ a week respite support from charity the Together Trust, arranged through their local authority. The four hours are tailored to Jamal’s needs and personal goals. The Together Trust sends a ‘play partner’ to the house twice a week to play different games that’ll help Jamal develop socially in things like playing by rules and taking turns, which Anetta says has made a “huge difference”. While he still faces difficulties like social anxiety and takes a little longer to understand new things, Jamal is progressing.

Now back at university studying towards a degree with the aim of going back to work, Anetta is in a position which seemed like a dream when the list of negatives was rolled out to her by doctors two years ago.

“I know it sounds silly, but we believed in him – we believed that he could do things,” Anetta says. “Our hope for the future is that we do as much as we can with him. That he’ll get on an aeroplane and he’ll go on holiday. He gets to plays football on a Saturday morning. That’s our goal – that we’ll give him those opportunities. I want him to be independent and to function on his own.

“Don’t give up on your child. Believe in them. It isn’t easy, but like any child, they will surprise you. The more confident you are, they will draw on that and that’ll make them thrive.”

Anetta and her family are supported by the Together Trust, a children’s charity working with children with challenging behaviour, physical disabilities, learning disabilities and autism spectrum disorders in the North West of England. Find out more at www.togethertrust.org.uk or call 0161 283 4848.

Harvey Price has been announced as a Mencap Ambassador, using his role to tackle stigma and raise awareness of disability