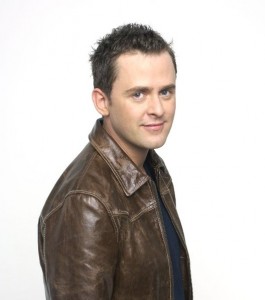 You might know him better for his on-air antics at BBC Radio 1, but presenter Scott Mills saw his life turned upside down when mum Sandra was diagnosed with multiple sclerosis.

“My mum was diagnosed with MS about six years ago – she was 54. She’s got primary progressive MS, so it’s not the one where you have relapses. It’s the one that kind of gets worse with time.

“She noticed she was getting a bit numb on one side, she was feeling a bit odd and things were more difficult than they should’ve been. So she went to get an MRI scan and got a diagnosis.

“It was really sad when she told us, but I know that I’ll rally round and so will my brother – help her in any way that we can. You’ve got to take every day and week and month and year as it comes. With this type of MS, you don’t know what’s going to happen or what the time scale is – there’s no drug you can take to make it better.

“We had quite a positive attitude towards it, and my mum still really has that. At the weekend, she was really tired after we walked round the shops for two hours and was probably in a bit of pain, but she’ll just carry on and she won’t let it beat her – she’s still holding down a full time job, she works five days a week. 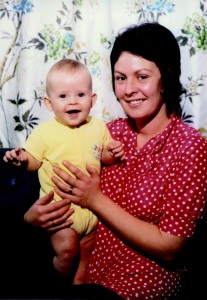 Scott as a baby with his mum Sandra

“I think we need to shed that image that MS is just something that old people get – it does affect a lot of young people. More and more people that I’m coming into contact with know somebody that has MS. I’m a big supporter of the MS Society. It is small, it’s not as big as some cancer charities or whatever – it’s not that prolific. But I’ll do anything to raise the profile of it.

“There aren’t really enough places to go to meet other people and get support, simply because there’s not enough funding. For instance, Beccy, who works on my show, was diagnosed with MS. She had this oxygen treatment and it’s massively benefited her. But where my mum lives in Southampton, there isn’t really anywhere where that’s available.

“MS has made me realise how much you take for granted when you are physically able. When my mum’s around, I’m very aware of what she can and can’t do and what the limits are, what procedures you have to put in place for things like airports. I couldn’t really take her down Oxford Street because it’d just stress her out. It makes you think twice about things.”

Scott is a supporter of the MS Society. The UK’s leading MS charity, the MS Society invests heavily in research towards a cure, as well as offering information and support for people and their families affected by the condition.

To find out more about the MS Society, or to make a donation towards their work, head towww.mssociety.org.uk or call 020 38 0700