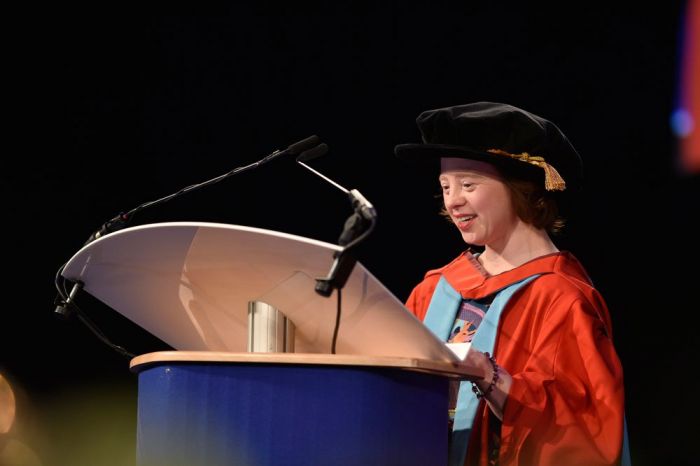 Credit to University of Nottingham

Actress, Sarah Gordy, has been awarded an honorary degree from the University of Nottingham – the first person with Down’s syndrome to be given the honour.

Sarah was awarded the honour yesterday (11 November) at the University Park campus, where she became a Doctor of Laws.

In her speech, she encouraged graduates to show everyone what they’re capable of, and make the future.

Monday so soon. Up and fast. Have a good week drink some water with it. Tomorrow travelling to Nottingham Uni with @dacatspjs to meet wonderful graduates and receive my honorary degree on Wednesday. Thrilled pic.twitter.com/PPYgg3QJkZ

Her speech told graduates that when she was younger, she was expected to have a ‘limited life’, and it was uncertain if she would walk or talk.

“Now, I don’t speak: I act. I learn scripts by talented writers. I have been on TV, stage and radio. I don’t just speak: I campaign… I spoke at the UN on World Down’s Syndrome Day. And I don’t just walk: I dance, and I have toured Europe as a dancer,” Sarah said, in her inspiring and uplifting speech.

Earlier this year, Sarah also became the first woman with Down’s syndrome to receive an MBE. She was awarded for services to the arts and disabled people.

Sarah has acted in Call the Midwife, Upstairs Downstairs, Strike: The Silkworm and Peak Practice. She has also appeared in numerous theatre productions, including Crocodiles and Once We Were Mothers.

Sarah is also a campaigner for Mencap, and became the charity’s first ambassador with a learning disability, in 2013.

Congratulations Sarah, from the whole team at Enable!

Are you following Enable on Twitter and Instagram? Make sure you do to stay up to date with all the latest news.

**Cover image credit to the University of Nottingham**