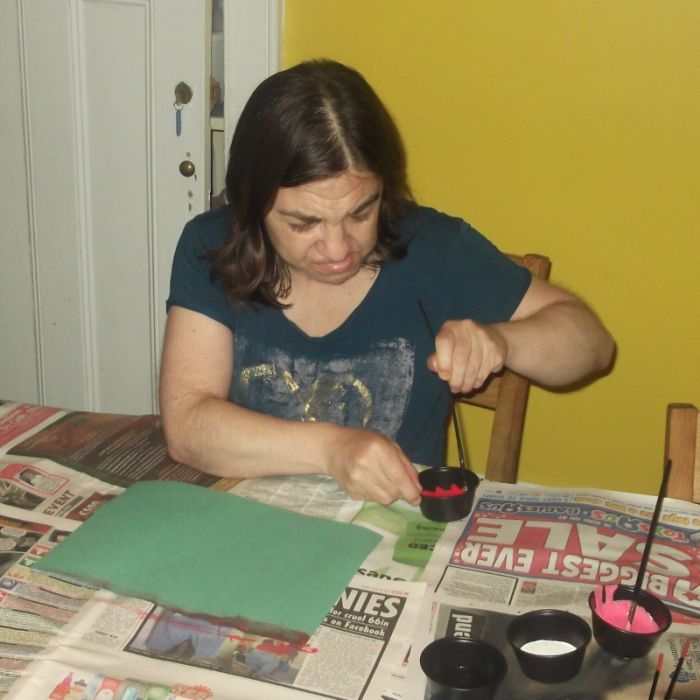 Never happier than with a paintbrush in her hand, a care home resident from Plymouth is helping bring some of the colours and textures of Rio de Janeiro to the city’s Theatre Royal.

Kay Morgan, 45, is working alongside set designer Fiona Chivers to create a backdrop for the upcoming ‘Funky Llama Club Night’ at the theatre’s TR2 venue at Neptune Park, Cattedown, on October 17.

She is a member of the Funky Llama mentoring programme that gives people with learning disabilities the chance to develop their skills alongside professionals and learn the basics of shaping and running events.

The Club Night will have a colourful flamboyant carnival theme and involve an evening of dancing, singing, films, DJs, chill-out zone and a bar, and will be accessible to everyone.

Kay, who has an autistic spectrum disorder and a learning disability and lives at Victoria House in Plymouth city centre, run by independent care provider Regard, is spending the next month working on the event.

“She is thrilled to bits to have the chance to become involved with the cabaret night,” said Victoria House service manager Sarah Ghent. “It’s put a real smile on her face and is really helping her to relax.”

Kay’s sister, Kerry Smith, who runs the King’s Arms at Torpoint, said her sister has always loved drawing and painting.

“Her disorder means she can make her very rigid about things. Doing this has really taken her out of herself and got her doing something different and meeting new people. She’s really in her element.”

The Funky Llama project is the brainchild of Theatre Royal creative learning director Victoria Allen and is run in partnership with Plymouth Music Zone and Attik Dance.

“People with learning disabilities should have the same opportunities as everyone else, whether that’s about developing as an artist, leading or taking part in arts activities or simply having a great night out,” said Victoria.

“We are proud and privileged to work alongside Kay and her fellow crew members to help build up their level of skill alongside the professionals and learn about putting on an event.”

The Club Night will be opened by Paignton group Samba Roc, a group of musicians who ‘drum to the beat of Brazil’ and also includes Too Hot for Candy ‘with big beats and funky drumming’ and an open-mic session.

The theatre ran a sell-out pilot Funky Llama cabaret event in 2010 at the Drum Theatre that was a huge success.

In May Funky Llama received £268,931 grant from the Big Lottery Reaching Communities Fund to help them continue their arts and training and mentoring programme.

Tickets for the Club Night cost £5 (no concessions). To book call the Theatre Royal Plymouth box office on 01752 260 960 or for further information visit: www.theatreroyal.com

Getting a good night’s sleep this Mental Health Awareness Week

Pet therapy: it’s a dog’s life with Doug the Pug