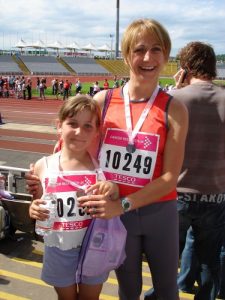 Eight months after being diagnosed with locked-in syndrome following a brainstem stroke, Kate Allatt walked out of hospital. The mum of three spoke to Enable’s Lindsay Cochrane about life before, during and after the stroke that changed her world…

In February 2010, Kate Allatt woke up to a very unusual situation. She was in a room she didn’t recognise, a clock at the foot of her bed showing it was ten minutes to three in the afternoon, with a nurse bustling about her.

Her first thought was for her three children, India, Harvey and Woody – who was getting them from school? And then she questioned where she was.

Three days previously, on 7 February, Kate had paid a visit to her local A&E. Her husband, Mark, had insisted they go after days of Kate complaining of a headache.

“I was very busy as a mum, as a business owner and everything else, and I put myself to the bottom of the pile, as most mums do,” Kate, who used to run a digital marketing firm, explains. “At the hospital, I was diagnosed with a stress-induced migraine. I was slurring, I was incoherent at times, but it was put down to that. So I was sent home with co-codomol and told to rest.”

Six hours later, she collapsed on the floor of her lounge. She had suffered a massive brainstem stroke at the age of 39.

Each year, around 150,000 Brits have a stroke, a quarter of whom are under 60. A stroke occurs when the blood supply to part of the brain is cut off, meaning brain cells are damaged or may die off.

Doctors initially thought that Kate was in a vegetative state. However, she was fully aware of everything going on around her, panicking about her family at home without her, terrified of what would happen next and unable to do anything about it. She couldn’t speak, swallow, go to the toilet or move. She was trapped in her own body. It took two weeks for medics to diagnose her with a brainstem stroke and locked-in syndrome. 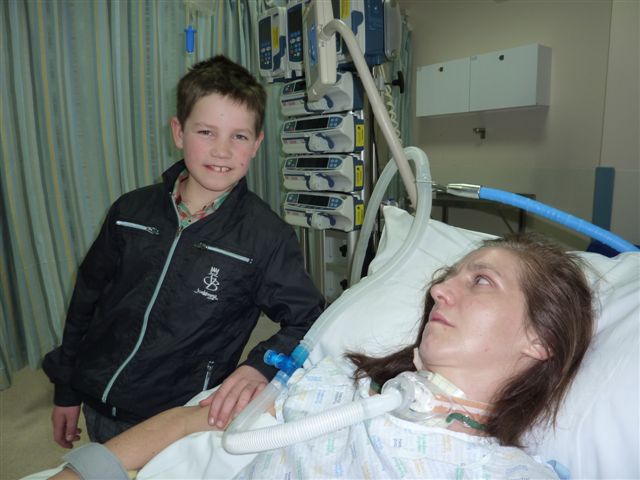 Kate in hospital following her stroke

“I was hysterical inside,” she says honestly. “My friends smuggled in a board, lettered A to Z, and said to me, ‘One blink for no, two for yes.’ My friend Jaqui went from A all the way to S, when I blinked twice, back to the beginning to get to L – and we got ‘sleep’. For the first time in three weeks I was given sleeping pills – I’d been awake all night long because I slept all day just to occupy myself.”

Weeks later, Kate was summoned for a meeting with her rehab team.

“The doctor said, ‘Thank you all for coming… I have nothing more to add’,” she says. “The conversation went onto long-term nursing care. I was in tears. I was allowed to communicate with the board – I blinked out the words ‘stand by me’. That was my turning point. They’d all written me off so I thought, ‘I’ll show you’.

And she did. Kate started to focus her efforts on getting her body to move. When, eight weeks after the stroke, her right thumb flickered, she knew there was hope. From that point, steady progress followed. After eight months, Kate walked out of the rehabilitation unit on sticks.

The battle wasn’t over. Kate was still using a wheelchair most of the time and she hadn’t regained her speech. She was back in her home in Dore where everything was the same apart from her – this, she admits, was the hardest thing to deal with.

“I had three kids who were very young at the time, and I had to be their mum,” she explains. “But I wasn’t strong enough to be a parent. I was severely depressed. I’m very positive but I would’ve taken a way out on two or three occasions.” 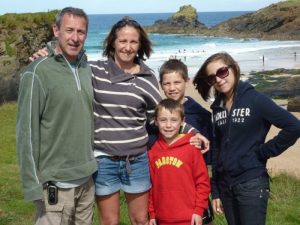 Kate with her family

With the support of her husband and children, Kate kept pushing forward. As a keen fell runner, tackling mountains and hills, she was determined to run by her one year anniversary. While the run didn’t quite happen, she did manage to shuffle on her own. The real run came months later in December 2011, when she managed a mile and a half.

Today, Kate runs her own charity for stroke patients, Fighting Strokes, has taken up road cycling and is working on her third book. Her brain has, against the odds, remapped itself. Around a third of stroke patients make significant progress – Kate’s almost complete turnaround, however, is still rare. For the rest, things aren’t so positive.

Kate does still have occasional problems with her mobility – walking in heels recently resulted in a fractured shoulder and running has been sidelined – but Kate is as busy as ever. These days, however, she makes sure there’s a little more time for her children.

“I wrote two books in two years,” she explains. “Of course I was interested in reaching out, but I was lying in the hospital thinking, ‘When my kids get to be my age, 40, they’ll have very few memories of their mum. That’ll be really hard for them.’ Writing was really driven by my need to leave a legacy. Truthfully. And now, my kids have something to be proud of.”

While Kate’s determination has played a huge part in her progress so far, she couldn’t have done it alone. She firmly believes that support from loved ones is just as important in the healing process as personal strength.

“My major supports have been my best friend Alison and my husband,” she adds. “Yes, we didn’t agree at times, me and my husband, but he never ever stopped believing in me. Even when everybody else did – even me. You need other people to give you the inspiration to keep fighting and keep trying to improve yourself and make that progress. That doesn’t mean a full recovery – people think they’ll be like they were before the stroke, but no one is. Not even me. But you have to have your loved ones to back your corner.”

Kate’s books Running Free and Gonna Fly Now! are available now – find out more about the books at www.gonnaflynowbook.com