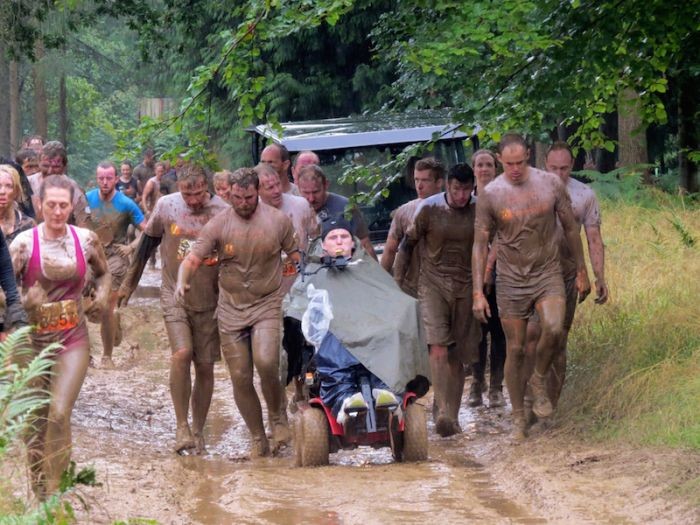 Despite a tragic accident leaving Rob Camm paralysed from the neck down at the age of 18, he won’t let his injury hold him back. Now 21 and studying at university, Rob recently completed the gruelling Tough Mudder event and test piloted a robotic walking suit. We had a chat with him about his incredible journey

You are the first tetraplegic person with a ventilator to complete Tough Mudder – how did you take part?

My X8 wheelchair is a chair on a quad bike which I control it with my chin as I have no movement in my arms and legs. I loved getting outside during the event but it was very tiring. It’s a 10-12 mile long course with military style obstacles, billed as a mental test as well as a physical one. It was absolutely pouring down so there was mud everywhere. I liked the emphasis on team work – it is all about camaraderie rather than finishing times. I managed the full distance of the course, even some really steep slopes through deep mud that had been traipsed through by around 8,000 people.

Before my accident I planned to do it with friends after our A-levels. The accident made me even more determined to take part. In the end we had a team of about 20 people taking part including me, two carers and my dad!

How did you train for the event?

I trained most nights from Easter onwards, out around the woods at home and along the canal. I had to learn how to control my chair off-road and built up my stamina and strength in my neck muscles. Nothing could have prepared us for the amount of mud involved!

How did it feel to take part?

The day was fantastic and The Tough Mudder team were brilliant too. They were a bit worried about me doing it at first, but we talked them through it and they were very supportive. The team has raised about £11,000 or Special Effect, the charity that helped me access eye gaze technology when I was in intensive care for nearly 100 days. It was also a great feeling knowing I did it for a charity that had helped me. I also had lot of help from the Spinal Injuries Association, Aspire and the Matt Hampson Foundation.

This year you were a ‘test pilot’ for an exoskeleton robotic suit which you controlled with your mind – what was that like?

It was an amazing feeling but strange seeing my feet moving again! I had to concentrate very hard to make it all work and it took four people to lift me into the suit, so it’s not practical for everyday use yet. But in 20 years’ time who knows how it will be developed?

Earlier in the year you won SIA’s Inspirational Achievement Award for Young People – how did that feel?

It was great just to be nominated for one of the Spinal Injuries Association’s awards, let alone win. The other guys who were shortlisted had also achieved so much. I was honoured. I met some really great people at the Rebuilding Lives Awards, it was good to share ideas and stories and also good to hear that other people get frustrated just like I do.

You’re studying politics and philosophy at the University of Bristol. What technology do you use for uni work?

I use Dragon Naturally Speaking which is voice recognition software. Smart Nav allows me to control a mouse by following a dot on my screen and Audio Note Taker helps me record lectures and organise my uni work.

What are your ambitions for after graduation?

I’ve had an interest in law for some time and so am pursing that by thinking about what specific area interests me. I’ve chatted to Matt King OBE who is also spinal cord injured and successfully practices law in London. He has been very helpful.

What do you think you’ve learned from your injury?

I have learned to work with other people better and to accept help – that has been very difficult as I always want to do things for myself.

I have learned to challenge people’s attitudes towards disability – I find some people’s use of language particularly irritating. I also get very mad if people don’t talk to me when I am the one asking the question.

I have also learnt so much about the generosity, kindness and support from lots of people who have just spent time helping me. I know I am very lucky to have great family and friends and our local community have been amazing.

I need to focus on getting a good degree. I have an internship planned with EDF Energy in their law department. As a company they have been incredibly supportive. We’ll hopefully do Tough Mudder again too!

What would you say to someone who has recently experienced a spinal injury?

Initially you will feel like your world has come crashing down around you but it does get better, a lot better. Don’t be too hard on yourself, give yourself time and accept the help you are offered. Most of all don’t let your injury hold you back. I have learned to work out what I want to do first, and then look at how I will do it afterwards!

Nominations for the 2016 Spinal Injuries Association Rebuilding Lives Awards open on 14 December until 29 February. Head to www.spinal.co.uk to nominate inspirational people in your life

It’s time to cook with The Children’s Trust