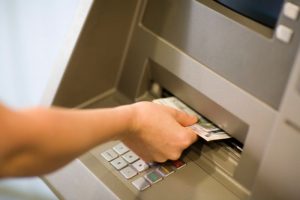 The Royal National Institute of Blind People (RNIB) has recognised the great work of Barclays Bank and PayPoint in being the first to introduce high numbers of talking ATMs to UK High Streets, awarding them with Finance Exemplars.

Thanks to the success of RNIB’s Make Money Talk campaign, blind and partially sighted people are now able to use talking ATMs in an increasing number of locations across the UK. By plugging a standard headset into the machine and following the spoken instructions, customers with sight loss can independently take out money or check their balance.

Barclays were the first High Street bank to make a significant number of their ATMs talk. Over 80 per cent of their 4,200 ATMs are now audio-enabled and a programme of replacement is ongoing to reach the 100 per cent milestone.

Alongside Barclays, PayPoint became the first independent provider (not linked to a bank) to make their ATMs talk, with one in four of their ATMs equipped with audio facilities. Plans are in place to increase this number to ensure even more customers can benefit.

Ashok Vaswani, CEO, Retail and Business Banking at Barclays, said: “We are thrilled to be presented with this award for Exemplar Service by RNIB. The role out of our talking ATMs has been a huge success and Barclays now have 3,500 ATMs with this capability all over the UK. We are committed to looking at how we can make banking truly accessible and exploring new and exciting ways to do this.”

“We are delighted that RNIB has presented PayPoint with this Exemplar Service award for our audio-enabled ATMs. PayPoint is at the heart of many local communities so the award acknowledges our ongoing commitment to making our services as accessible as possible for everyone.”

Fazilet Hadi, RNIB’s Group Director of Inclusive Society, said: “We are very pleased to give Barclays and PayPoint Exemplar Service awards for their work in rolling out talking ATMs, in support of the RNIB Make Money Talk campaign.

“The talking features which both organisations have added to their ATMs demonstrate their commitment to improving the accessibility of their services and will make a big difference to their blind and partially sighted customers.”

The locations of PayPoint’s speech-enabled ATMs can be found at www.paypoint.co.uk. Enter your postcode in the Locator and then click on the ‘Speech enabled PayPoint ATM’ filter.

Barclays is a major global financial services provider engaged in personal banking, credit cards, corporate and investment banking and wealth and investment management with an extensive international presence in Europe, the Americas, Africa and Asia. Barclays’ purpose is to help people achieve their ambitions – in the right way.

With over 300 years of history and expertise in banking, Barclays operates in over 50 countries and employs approximately 140,000 people. Barclays moves, lends, invests and protects money for customers and clients worldwide.

For further information about Barclays, please visit our website www.barclays.com

PayPoint’s ATM network numbers more than 2,800 ‘LINK’ branded machines across the UK, mainly in the same sites as PayPoint terminals.

PayPoint is widely recognised for its leadership in payment systems, smart technology and consumer service.

Over 90% of disabled people would revisit venues with good accessibility