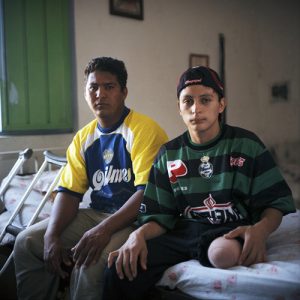 Every year, hundreds of Central American migrants fall beneath trains while trying to cross the US border. Many are severely disabled and left to fend for themselves. Rachael Fulton spoke with one charity that aims to help them…

Kidnap, human trafficking, injury and death are among the terrifying risks faced by Central America’s train migrants. Travellers cling desperately to cargo train carriages, taking a perilous route across the US Border in pursuit of the American dream. With little money and limited knowledge about their destination, migrants risk their lives to escape Central America’s abject poverty and unemployment.

“Travellers don’t know how dangerous the journey is because their relatives in the United States don’t tell them,” says Aracy Matus Sánchez, who works with migrant amputees at Jesus the Good Shepherd Shelter in Chiapas, Mexico.

“There’s very few job opportunities in Central America, the government has no interest in making jobs. That’s why people risk the dangers and want to cross through Mexico.”

Many of the men, women and children who attempt to traverse the border are gravely wounded during their journey. They often fall under trains when jumping from carriage to carriage, severing their limbs. Gangsters who patrol the route also take advantage of vulnerable travellers, hacking at them with machetes and stealing their money. The migrants are left disabled and penniless, with no chance of reaching their families in America.

The shelter was founded in 1990 and since then has cared for up to 50 people every day, providing support to travellers seeking medical and financial assistance.

While many hospitals in Mexico discharge migrant amputees just days after their operation, refuges like Jesus The Good Shepherd offer them rehabilitation, access to prosthetic limbs and funding for any surgery they may need. The refuge also trains newly disabled migrants in computer skills, sewing and handicraft to help them adjust to their new disability and increase their chances of employability in future.

“The refuge is for all sick people, regardless of nationality, gender or age,” says Aracy. “Last year, a mother abandoned her baby because the child had been born with one leg. The baby would definitely have been abandoned in a rubbish bin if it weren’t for the refuge, because Central Americans don’t trust the government, in Mexico or elsewhere. They tend to hide their problems.”

The shelter relies entirely on sponsorship and donations to operate and volunteers support patients to the best of their abilities. However, no matter how much support they can offer, the terrifying trend of risking it all for a better life continues.