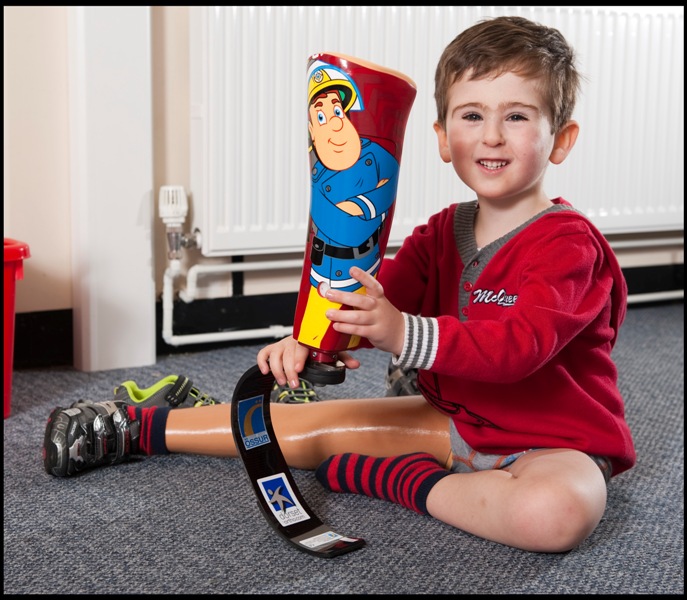 Rio Woolf, aged 4, finished 2012 on a high. He received what his mother describes as the perfect gift  – the ability to run.

Born without a tibia, knee or ankle joint, Rio had his lower right leg amputated at 14 months. Three years on, like many little boys, Rio dreams of following in the footsteps of his sporting idol, Jonnie Peacock.

The sprinter ran into the record books, winning a gold medal in the T44 100m at the 2012 Paralympic Games. Now the British hero has improved Rio’s chances of following in his footsteps.

Rio first met the Gold medalist at a filming promo for Limb Powers Sport Fest – an open weekend event set up by the British Paralympic Association (BPA) to encourage disabled youngsters to take up sport.

Touched by the youngster’s enthusiasm for the Summer Paralympics, the blade runner put Rio’s parents in contact with Dorset Orthopaedic. This prompted Bob Watts, managing director at the Dorset based clinic to set about securing sponsorship for an Össur running blade. In fact, he decided to donate the prosthetic socket himself.

A wonderful Christmas present, Rio was soon bouncing for joy as he was being fitted with a lightweight carbon-fibre blade decorated with his favourite character Fireman Sam.

Juliette Woolf, Rio’s mother said “London 2012 transformed Rio’s life – from being downhearted about not being able to run as fast as his friends earlier in the year, he was then inspired and motivated watching “people with special legs running.”

“We took Rio along to the Paralympic Primary Games for children and he loved participating, even with his NHS leg. He showed he loved to run.

“The only problem was that his old NHS leg was very heavy. Despite this he was running quite fast, he had the speed but not the right equipment.”

Bob Watts, said: “The blade and socket we have had made for Rio is 150g lighter than the NHS prosthetic legs. The blade is made out of carbon fibre which is very light, springs back into shape, and 95 per cent of energy you put into it will come back during running.”

The delighted mother said: “My husband and I are incredibly thankful to Dorset Orthopaedic and we are hugely indebted to them for giving Rio this amazing opportunity. Now there is nothing stopping him.”

“Like all parents, we just want to give our son the best opportunities for him to enjoy life to the full!”

As a result Rio’s mother has started a fundraising campaign so Rio can continue wearing the blades as he grows and needs replacements.

Rio’s physiotherapist from Playskill commented: “Having a prosthetic blade at a young age is an amazing opportunity for a young child. With it comes the ability to run with peers. Often children with an amputation are left to walk while their peers literally run around them.

“Rio can now run, jump and play football and get involved with Paralympic sport that much earlier. He has a better quality of life and a new sense of freedom and movement.”

Hayley Ginn, Jonnie Peacock’s former Coach has taken a keen interest in Rio and will be helping him learn to use his blade in the best way to get the most out of it.

As one of the UK’s leading providers of prosthetic, orthotic, silicone and rehabilitation services, Dorset Orthopaedic has the size, strength and skills to help clients live life without limits. With experience meeting the needs of complex cases and recognition as a world leader in silicone skin solutions, Dorset Orthopaedic is passionate about delivering exceptional products and support.