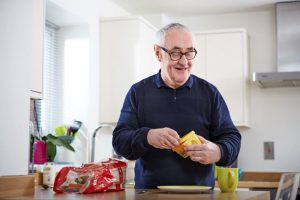 New independent research by the University of Birmingham has confirmed the valuable role that activity monitoring technology can play in determining the most appropriate care for those with learning disabilities.

The research, which involved nine local authorities and 33 care providers in England, tested the use of Just Checking activity monitoring equipment to summarise how a person naturally behaves in their home, combined with advice about person-centred care planning.

Just Checking uses small wireless sensors placed around an individual’s home to build an objective picture of their daily living routine, without the use of cameras or microphones. It supports the principle of safeguarding against deprivation of liberty and complies with the Mental Capacity Act.

The research found that, when care providers had access to the objective data the technology provided, they were able to identify an appropriate level of care for each individual.

The research identified that care providers were able to use the technology to achieve improved outcomes for individuals, improved person-centred support and achievement of goals, as well as greater independence and autonomy for individuals.  Benefits also included having objective data on which to base decisions, identifying previously unknown issues and the ability to reconfigure the support to a more appropriate level.

Birmingham University concluded that the Just Checking activity monitoring approach is viable, acceptable and useful to service providers and commissioners of care for adults with learning disabilities.

One individual involved in the study was Greg, who is 56, lives in his own house, and is supported by registered charity ‘Options’.

While Greg went to bed at a similar time to his carer, the Just Checking system identified that he often came downstairs later to sleep on the sofa in the lounge, although he never called on the sleep-in support. It turned out that his bed was not comfortable and he wasn’t keen on his room.  A new bed was organised and Greg was involved in choosing things and re-decorating his room.

The Just Checking system also identified that Greg was spending a lot of time in the kitchen during the day and, on talking to him about it, Greg revealed a desire to learn how to cook. This desire was supported and, before long, he was cooking a variety of dishes, travelling on public transport to shop for ingredients and inviting people round to enjoy meals with him. He feels purposeful in the kitchen when he is on his own and he likes to keep it clean and tidy.

Greg also signed up for a cookery course, was eating more healthily and, over a year, lost more than two stone, and feels much better for it.

Following his success in the kitchen, he has been encouraged to start looking after other aspects of the house. His achievements have given him confidence and he is now more independent. Everyone involved in Greg’s journey has commented on the huge steps that have been made after his passion for cooking was identified, along with the right support to help him make it happen.

Comments Simon Price, Chief Executive of Just Checking: “Just Checking builds on pioneering work in supported living and residential care of adults with learning disabilities. The Just Checking technology shows when service users are independent and when they call on care staff; the effect of staff actions; and the appropriateness of care plans. It highlights where over-care exists, and how it can be changed to be more person-centred, leading to better outcomes for service users and more economical and sustainable services for commissioning bodies.

“We are delighted that this independent research by the University of Birmingham and KPMG has confirmed the value of the Just Checking approach in care planning for adults with learning disabilities.  It provides the evidence required by commissioners to take up the approach, and we hope, therefore, that this will allow Just Checking to make an important contribution to the future care planning for those with learning disabilities.”