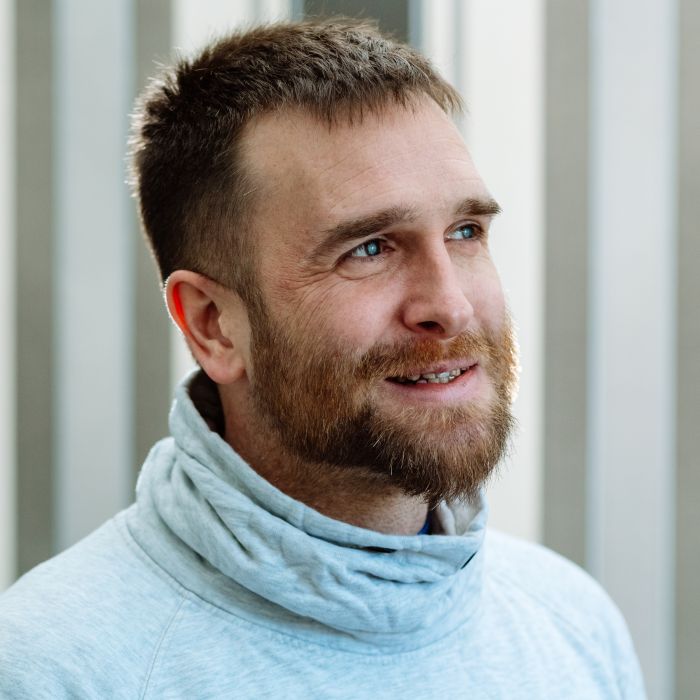 I joined the RAF to get away from the Troubles in Northern Ireland when I was 18. I won a lot of medals and commendations and I represented the UK Armed Forces in shooting.

There was a lot of travel, sometimes to good places and sometimes to bad places – I really enjoyed going to the Netherlands.

When I was teaching people how to parachute back in 2003, one person strapped to my back didn’t listen to me: 16 stone landed on my back and broke it. I spent three months strapped to a bed in London in rehab. I was living in Scotland at the time and just wanted to get home, and I was eventually brought back to Leuchars from Frimley Park Hospital after multiple operations on my back. It took months to learn to crawl, then to walk and build up strength in my back and arms. It took two years to get from walking to jogging and then running.

I passed all my armed forces fitness tests again, it was hard work but I basically wanted to prove them wrong. I knew I was going to run, and have a job and get on with my life.

After I left the RAF, I was working on the oil rigs, but I was made redundant in March. By June, I was blind after contracting chicken pox. My savings didn’t last and it was pretty hard.

Fife Society for the Blind taught me how to navigate with a cane in 2015 and put me in touch with SSAFA, the Armed Forces charity. SSAFA and Blind Veterans UK changed my life. Blind Veterans UK had me rally driving, driving a dune buggy and even a hovercraft: I was smiling for a month after driving the hovercraft! The thing I miss the most is being able to drive – just going to buy some bread and milk takes five minutes in a car rather than 40 minutes – it winds you up.

My local MP for the North East of Fife, Steven Gethins, helped me get my house in St Andrews. It’s really quiet here and I love it. SSAFA helped me get the flooring and goods for my kitchen.

Technology plays a massive role in my life: my home speaks to me now. I have apps that tell me what I’m wearing when I’m getting dressed and that read labels in supermarkets.

I’m up and walking about, and now I’m climbing. I train with the GB Climbing Team and I’m training with Johnny Dawes, the lead British Mountaineering Council coach, with the aim of being in the 2020 Summer Paralympics and 2024 Summer Paralympics. My coach Lee Evans is an ex-army commando who has had PTSD – he’s been great. St Andrews University gave me a local athlete scholarship, and I train using Johnny and Lee’s methods in the university’s facilities. Last summer, I went to the European, International and World Championships, and lots of UK competitions, and I’ve represented the Blind Veterans in in UK and will represent them in the US this April. It’s been a very steep learning curve.

I’m humbled to be asked to do these things and to travel constantly. I’ve been black blind since last May. It’s been scary, you have to learn new things, but I’ve started to adapt.

SSAFA is the oldest national military charity. It provides lifelong support to serving personnel, veterans and their families during their time of need.  For more information, visit www.ssafa.org.uk or call 0800 731 4880