It’s a colossal task by anyone’s standards, so when a team including six injured servicemen set off to tackle the epic Dakar Rally earlier this year, many questioned if they’d finish the gruelling race – but they did. Major Matt O’Hare and Corporal Philip Gillespie, the two Race2Recovery drivers who made it to the finish line, tell us about the biggest challenge of their lives…

Three countries, more than 8,000km of difficult roads and hostile terrains and sweltering temperatures – the Dakar Rally is one of the most challenging events that the world of motorsport has to offer. Hundreds of teams from around the world take to their motorcycles, quads, cars and trucks every year, but less than half make it to the finish line.

In 2011, Captain Tony Harris decided that he was ready for the challenge of the Dakar. For him, however, it was going to be even harder. In 2008, he lost a leg following a bomb blast in Afghanistan.

Tony had the idea that he could take a team of injured soldiers out to South America to become the first amputees to compete, raising funds for Tedworth House rehabilitation centre for injured soldiers at the same time. Idea in place, he rounded up some army friends and Race2Recovery was born.

A team of 28 men and women, both military and civilian, headed out to Peru at the beginning of the year. On 20 January, after fifteen gruelling days of set backs, highs and lows, the final Race2Recovery car left in the race crossed the finish line, the team’s mission accomplished.

“Everyone was cheering, flags waving, the whole team up on the podium – it was an amazing feeling,” recalls the car’s co-driver, Corporal Philip ‘Barney’ Gillespie. “It was a massive sense of achievement, and relief as well – three of our cars were already out, so there was a bit of pressure on us to do it, not intentionally of course. And once we did it, that pressure lifted. It was emotional.”

Motorsports fan Barney lost his right leg at the age of 22 while serving in Afghanistan. He’d stepped on an improvised explosive device, tearing off his right leg below the knee. 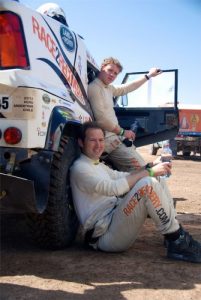 “I knew I’d lost a leg straight away,” Barney recalls. “I didn’t go unconscious when I was blown up – I looked down and it was gone. I just thought, ‘It’s over. My life as I know it is now over. I’m going to lose my career, I’m going to lose my friends, I’m not going to have the same sort of money’… It’s not just a job, the army – it’s a lifestyle. To me, that was all gone.

“All these bad thoughts, all the horrible thoughts, come into your mind. Is my girlfriend going to stay with me? How are my family going to treat me? I remember saying, while I was lying on the ground ten minutes after getting blown up, ‘I’m not ever going to be able to drive my car again.’ It probably took me three or four weeks of feeling sorry for myself until one day, I said to myself, ‘There’s no point in this –time to start being positive about it and seeing what I can do’.”

Tony, meanwhile, had teamed up with former army colleague Major Matt O’Hare to help run things, and steadily they recruited more members for various roles. Three months after being injured in Helmand Province, Barney signed up. It took two years of tough physical training, working tirelessly at gaining sponsorship, mental preparation and paperwork, before the 28 drivers, co-drivers, logistics experts and mechanics made it to South America.

The Dakar Rally is split into 14 stages, with thousands of kilometres taking place off-road, travelling through Peru, Argentina and Chile. Race2Recovery entered four cars, Wildcats supplied by sponsors Land Rover. Each car had one driver with one co-driver who acted as navigator. Founder Tony drove with Cathy Derousseaux, an experienced rally co-driver; Marine Staff Sergeant Mark Zambon, who lost both of his legs in 2011 after stepping on an IED, paired up with rally specialist Ben Gott; triple amputee Corporal Tom Neathway rode alongside civilian rally driver Justin Birchall and Barney with Matt driving completed the set in the fourth car.

It soon became clear to the whole team exactly why the Dakar Rally has its tough reputation. By day four, Tony and Cathy’s Wildcat was forced to drop out, closely followed by Justin and Tom. On day five, disaster struck after one of the support vehicles, containing three of the team members, was involved in a collision with two other civilian vehicles – all three Race2Recovery men were raced to hospital with injuries, and, tragically, two people from the other cars died, bringing home the message of just how dangerous the team’s mission was.

At the end of stage six, the third car was forced to retire, leaving just Matt and Barney in the race in their Wildcat, nicknamed Joy – but they weren’t without their problems. The car’s engine was overheating in the scorching South American sun, forcing the men to drive at night.

“Me and Barney weren’t going to give up and throw the towel in,” Matt says. “However, in our heart of hearts, towards the latter end of the first week, I don’t think either of us thought that our car was going to make it to the end.”

“We were tired, it was raining, we were both miserable,” Barney adds. “We were both in a pretty bad place to be honest. I thought there was no way we’d finish it. The car was dying constantly. Me and Matt both thought, ‘That’s it’.”

On the mid-point rest day, the team mechanics installed more fans in the car’s engine and water jets to help cool it down. That 24-hour period turned the race around for Race2Recovery’s remaining Wildcat.

With the horrors of the first leg behind them, the men started to enjoy the race.

“I think the variety of the terrain is one of the most amazing things about the race,” Matt explains. “There were upright sand dunes, which are called cathedral dunes because they’re as high as – well, as far as the eye can see. Then you come onto a dusty canyon, you could’ve been driving through the set of a Western film. In Argentina, it was lush green hills on amazing gravel roads which were enormous fun to drive on.” 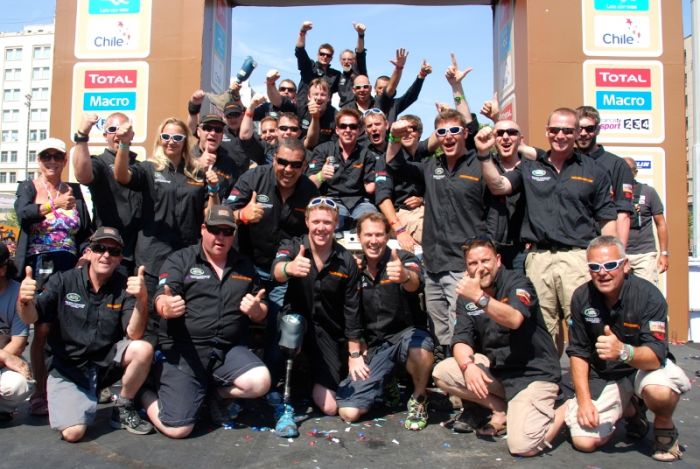 The second week passed incident-free, and on the fifteenth day, Matt, Barney, and the rest of the team, accomplished what they set out to do – they crossed the finish line in Chile. However, the mission isn’t over yet. Support from the public – and a few famous faces, such as the Duke and Duchess of Cambridge and Prince Harry – has been incredible, and the team is on course to hit the £250,000 mark with their fundraising efforts for Tedworth House. They’re hopeful that they can drive this to £1million this year. As well as the terrific total achieved, Barney can say he’s the first amputee in the world to successfully complete the Dakar Rally.

“There’s not too many firsts left any more,” he muses. “I think it’s good for other disabled people to see too. Guys have done the North Pole, the Atlantic, stuff like that – it gives others something to aim for. If me doing this changes things for one young lad who’s sitting in hospital thinking, ‘it’s over’, just like I was, it’s all worthwhile for me.

“It’s changed things for me too. Some mornings you wake up and you put on your prosthetic leg and you still think, ‘This is rubbish’. But since we’ve got back, I’ve been thinking, ‘I had this leg on in the middle of a desert! I could walk there. This is nothing, going and putting the bin out.’ I just think of it that way.”

“Able-bodied people fail the Dakar,” points out Matt. “There were only 86 or 87 cars left at the end of the race – 230-odd started. It’s physically so very demanding on able-bodied people, but Barney Gillespie did the whole race with a prosthetic leg. Burning a couple of hundred calories digging sand, walking on the dunes – Barney was working immeasurably harder to do that. I think it’s a pretty bold statement.”

Now that it’s over, and the team have just about recovered from their epic trip, everyone’s asking the same thing – would they do it again?

“In a heartbeat,” Matt says instantly. “There are still things out there which are viewed as unattainable by injured or disabled guys, but I’m fairly certain that with a bit of time, we can do it. If someone like Barney decides he won’t fail, he won’t fail. He’ll achieve whatever he sets his sights on. I find that pretty inspirational.”

To donate to the Race2Recovery fund, in support of Tedworth House, head to www.race2recovery.com

Disability charity calls for minister for disabled children and families