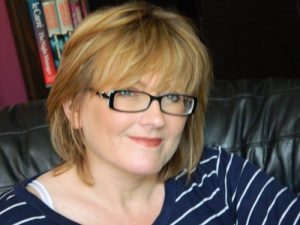 A profoundly deaf mother who struggled for years to find work told how her life has been transformed by a Bristol company committed to employing people with disabilities.

Yvonne Bowman, 47, who lost her hearing after being struck by a rare autoimmune disease called Cogan’s Syndrome in 1993, has joined Blue Badge Company, a manufacturing business which makes stylish and practical living aids.

The mother-of-two, from Shipham, near Cheddar, was recruited to Blue Badge Company’s fast-growing production team, helping make the colourful Blue Badge display wallets, walking stick bags, lap trays and other products which have proved so popular.

Blue Badge Company, whose workforce has grown from one to 21 in two years, has made a commitment to ensure 40 per cent of its staff are either registered disabled or a primary care giver.

After going deaf, Yvonne struggled to find permanent work and took up a number of short-term and voluntary roles but was largely unemployed.

She heard about Blue Badge Company through an organisation called Pluss, which helps people with disabilities to find work.

As a skilled seamstress and knitter, Yvonne applied for a role at Blue Badge Company and was thrilled to be taken on last month.

She said: “Ideally, I wanted to find something that I knew involved working with components and the Blue Badge Company came up a few times and seemed the perfect opportunity for myself as I love to craft and sew along with knitting and crochet.

“Having found out the company were keen to employ people with disabilities onto the team, it seemed the perfect kind of job for me.”

The company recently signed a deal to supple Argos online and already stocks Halfords, Boots and the Post Office.

“Working with Blue Badge has given me newfound confidence in working with people again after years of being out of touch, as well as providing my family home with extra income, meaning I can contribute towards things just as my husband, who has normal hearing, does,” Yvonne said.

She had never experienced hearing problems before suffering Cogan’s Syndrome, which led to the loss of her hearing in just a fortnight.

She said: “It happened over a period of just two weeks and I was left profoundly deafened, finding myself in a scary world with no hearing.”

Yvonne was referred for a cochlear implant in 1994, which bought back some artificial hearing in her right ear. She was allowed to stay in her job as an assembler or calibrator of thermostat controls as her hearing did not affect her work.

In 1996 she left this job after getting married and moving further north.

Her struggles began when she tried to return to work after a few years at home looking after her young children.

“I had always wanted to go back to work as they got older but it was very difficult to find a job being unable to hear and battling with balance issues,” she said.

“I worked voluntarily at the First School my daughters were attending, where I helped out in the library and assisted in the classroom. I started to apply for part time but never even got to an interview.

“Being deafened made it very difficult to find a job that didn’t involve hearing. It was disheartening.”

She worked as a representative for Kleeneze for six months before finding Pluss and Blue Badge Company.

“Thanks to Blue Badge Company I once again have a permanent job I enjoy with wonderful people, I am so grateful they gave me the opportunity to prove myself,” she said.

Ellen Green, director at the Blue Badge Company, said: “Being able to employ people who are disabled is as much a part of the direction of this business as the products we make and sell.

“Being disabled is in no way a barrier to work and Yvonne is a great example of a hard working person, who, through no fault of her own, has faced challenges that able bodied people do not experience when trying to secure work.

“The response and reaction to Dragons’ Den – apart from receiving two months’ orders in 24 hours – has enabled us to accelerate our fast growth programme and Yvonne’s appointment is another milestone following a busy 2015.”

Disabled students say employers have ‘no idea’ about disability

Learning Disability at Work Week 2020: Changing the landscape of the workplace