The NHS is a wonderful thing – but the food they’re serving up in their hospitals? Not so much. Lindsay Cochrane looks into the state of the food on offer on wards across the nation – and what needs to change. 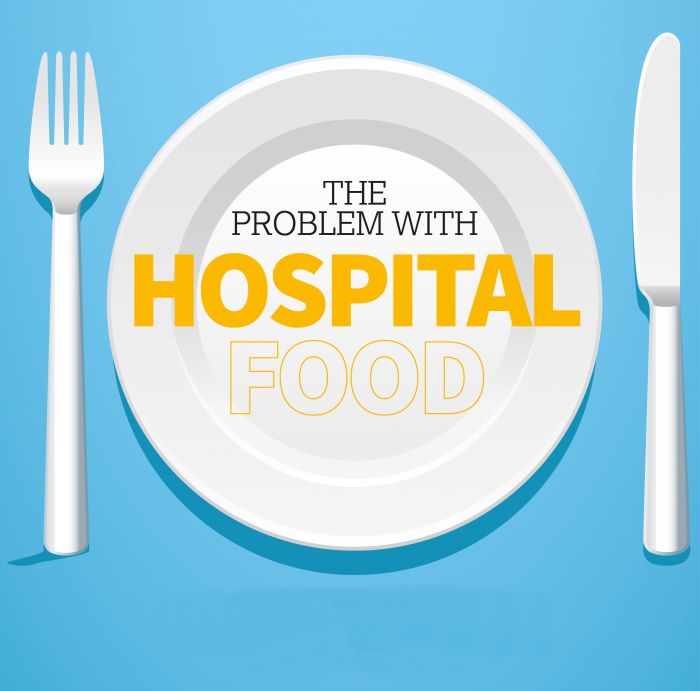 In December, I spent ten nights in my local hospital, admitted after a two-year battle with my Crohn’s disease got all too much to handle. I was going to the loo with extreme diarrhoea about 30 times a day; I was dehydrated and exhausted. Food was, I’ll be honest, the last thing on my mind.

The nature of my inflammatory bowel disease means that, at times, eating can be tricky. I go through spells where I eat predominantly white food (think pasta, mashed potatoes and plain chicken). Greasy, fatty, spicy foods are never welcome, and red meat is best avoided.

I told the staff on my ward all of this. Yet at mealtimes, I would be presented with unappealing food that I knew I couldn’t digest. Dodgy-looking kormas. Roast dinners with overcooked, dried-up chicken drenched in gloopy gravy. Shepherd’s pie featuring grey mince. The highlight was a veggie burger served with cold mash.

So I went without, and relied on my parents to appear once they’d finished work with something appropriate. Nobody questioned this. Nobody offered me an alternative. I was simply told I’d ‘need to eat more’ when my ever-plummeting weight was checked. But eat what?

My experience of hospital food is, sadly, not unique. In wards across the country, patients are being presented with unappetising, unhealthy dinners that are doing nothing to aid their recovery, boost their defences or make them feel better.

“We do hear horror stories,” admits Katherine Button of the Campaign for Better Hospital Food. “Most patient concerns we hear could be summed up as a lack of thought and care going into the food as it’s served, and not enough money going into the ingredients.”

In 2014, a set of standards was issued for hospital food in England as part of the NHS Standard Contract – at the time, campaigners were assured that this was as good as law. The reality is that it’s merely guidance.

In March, the campaign published a new report, which analysed food output in London hospitals. The report found that half of London hospitals surveyed were not meeting the basic food standards set out in the NHS Standard Contract. Department of Health figures from January also found that half of English hospitals are failing to comply with these standards – so the campaign research is representative of the country as a whole.

The report also found that two thirds of hospitals do not cook fresh food for patients. Only one of the London hospitals met all five standards. And 20% failed to provide a hot meal for patients who aren’t there at mealtimes – so if you’re taken off for a scan or procedure elsewhere over lunch, you can look forward to a sandwich upon your return. If you’re lucky.

“What we found was that practice was very patchy,” Katherine explains. “Most hospitals are doing well in some areas and poorly in others. A couple of hospitals are failing across the board, but even the highest performing hospitals have work still to do. Hospitals that we hold up as being real beacons of good practice – ones like Guy’s and St Thomas’ Hospital – cook great fresh food on-site but even they don’t always meet all of the hospital food standards. Hospital food standards are not set down in law in the same way as school food standards. So we call the situation with hospital food now a ‘loose regulatory environment’ – there’s no legal standards, so what exists instead is an opt-in, opt-out situation, and what food hospitals serve depends largely on the individual staff in that hospital.”

Katherine and the campaign are calling for tougher standards to be written into legislation – so that serving up good quality, nutritious, freshly prepared food isn’t an option, but a requirement for hospital chiefs.

“We want hospital food standards to be set down in law, akin to the standards that exist for school food,” Katherine says. “Right now, if you’re a patient and you think you are not getting the food you need to get well, you don’t really have any legal recourse to complain. The food rules are laid down in a contract between the hospital trust and the local clinical commissioning group, so it’s much more complex, and patients are locked out of the process. We think that we need legal hospital food standards to simplify things for hospitals and patients, and to raise the bar on food quality and catering standards in hospitals across the board.”

The Campaign for Better Hospital Food is also calling for better quality, sustainable ingredients, as well as tighter restrictions on food sold in hospital shops and in vending machines.

“At the moment, there are no restrictions on what can and can’t be sold in hospital vending machines. So in an emergency room, you could have a vending machine full of fizzy drinks and no water,” Katherine explains. “Or crisps and chocolate on a ward for children. Perhaps, as a patient, you’ve missed a meal or there’s nothing available that you can eat – your option is the shop or the vending machine. Then it becomes a real issue. In Scotland, they have really strict rules around what you can sell in a vending machine in hospitals, in what’s called the Healthy Living Award Plus. We’d like to see an equivalent standard introduced in England.”

The NHS Standard Contract standards are a step in the right direction – but Katherine argues that these need to
be tightened up, and strictly enforced, to ensure that patients are getting the nutrition, variety and respect that they deserve.

“From the reports that we get and the stories we’ve been told, there’s a lot to be done in terms of patient food,” she says. “But there’s also a lot of good practice, which shows it can be done. It just takes a bit of time, thought and prioritising.”

The robots helping children with additional needs go to school