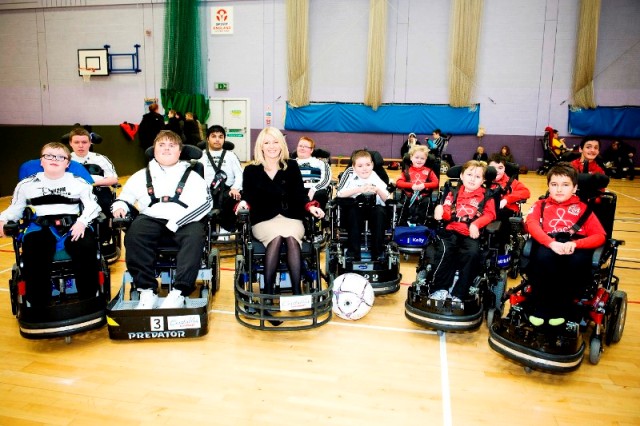 The Minister for Disabled People Esther McVey MP joined youngsters in Bolton on Sunday to try powerchair football for the first time.

The North West Powerchair Football League is one of the largest in the country and attracts players from as far away as Telford and Yorkshire who compete once a month at Smithills Sport Centre. It’s the first time a VIP has visited the league.

Powerchair football is a fairly new sport in the UK and offers an opportunity for disabled youngsters who use electric wheelchairs to compete and for their families to meet up.

The league exists thanks to Bolton man Mark Clayton whose disabled son Jamie wanted to compete at sport. Powerchair football is the only sport Jamie can do so Mark decided to create a league that would give youngsters in a similar position to Jamie the opportunity to compete. The league is now going from strength to strength.

Esther McVey said: “I was really impressed by the enthusiasm and commitment of all the players and their families and I really enjoyed getting to grips with the sport. The players were very skilful and I will need more practise to get anywhere near their standard.”

Chairman of the North West Powerchair Football League Mark Clayton added: “We’re trying to raise the profile of the sport as lots of people still don’t know it exists. The visit from the Minister was a wonderful experience and early Christmas present – it will really help in our efforts to raise awareness and get more youngsters involved.

Esther McVey also had the opportunity to have a demonstration of a wheelchair accessible vehicle from the league sponsor www.constablesmobility.com  and learn about the importance of properly tested conversions.

Powerchair football, also known as wheelchair football, is a competitive team sport for people with disabilities who use power wheelchairs. Two teams of four players use powerchairs equipped with footguards to attack, defend, and spin-kick a 330mm football in an attempt to score goals. It is currently the only sport for people who use powerchairs and the players are hopeful that it will be included in the 2020 Paralympics.

There are 13 teams in the North West Powerchair League. The first six are premiership teams and the second seven are championship teams. They include the: Bolton Bullets; Sale Academics; Sale Engineers; Everton; Oldham Wheelies A; Silver Bullets; Bolton Jets; Oakwood Eagles; Oldham Wheelies B; Sale Mancs; Telford; Yorkshire A and Yorkshire B.

Sponsor Constables Mobility is one of the UK’s leading manufacturers and suppliers of rear access, crash-tested wheelchair accessible vehicles (WAVs).

Powerchair football was first played in France in the 1970s. It then spread around Europe and to America.  The North West Powerchair Football League is the biggest in the UK with 13 teams playing across two divisions – Premiership and Championship. The teams within each division will play against each other a number of times throughout the season to determine division winners at the end of the season. The 2012 season begins on the 9th September and runs through until May 2013. Each tournament attracts 80 to 100 spectators.

There are 13 teams, the first six are premiership teams and the second seven are championship teams.