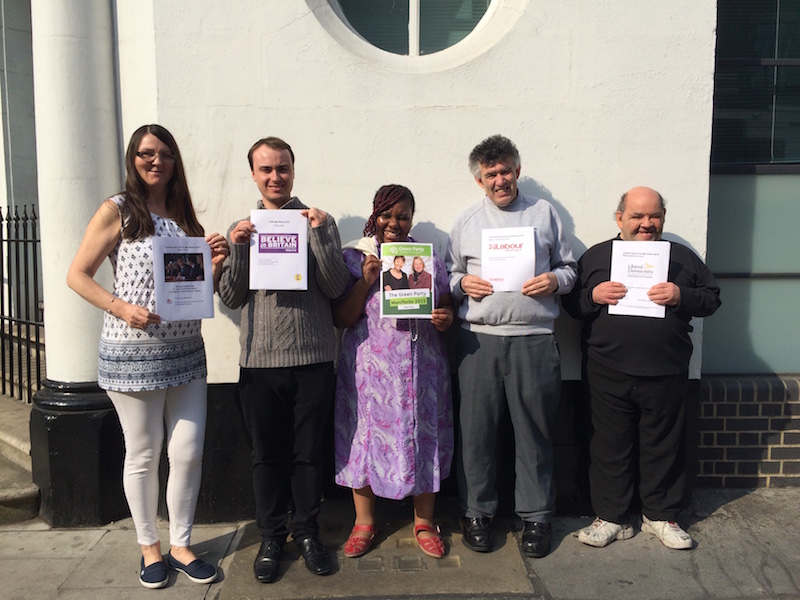 Mencap’s Parliamentary Affairs Assistant, who has a learning disability, wrote to all of the Party Leaders to ask them to produce Easy Read manifestos

Today, the main five national political parties have launched accessible versions of their party manifestos for people with a learning disability. The Easy Read manifestos use simple language and pictures, which make it easier for people with communication difficulties to understand what each party stands for.

The Conservatives, Labour, Liberal Democrats and UKIP have worked with Mencap to produce the Easy Read manifestos, with the Greens also producing an accessible version of their manifesto. All five manifestos have gone live on Mencap’s website today: www.mencap.org.uk/easymanifestos

In response to a UK-wide call from people with a learning disability and their families for more accessible information about what the parties in this year’s General Election stand for, Mencap’s Parliamentary Affairs Assistant, Ismail Kaji, wrote to all of the Party Leaders to ask them to produce Easy Read manifestos.

Ismail Kaji, who has a learning disability, and is Parliamentary Affairs Assistant for Mencap, said:

“I am really pleased because I wrote to all the party leaders last year asking them to produce an Easy Read version of their manifestos.

“The Easy Read manifestos use simple language and pictures, which make it easier to understand what each party is promising. This will mean that people with a learning disability feel more valued and included and understand why their vote counts.

“They can then make their own choice about who they want to vote for at the General Election on Thursday 7 May 2015. Our voices matter. Together, people with a learning disability and our families can make a difference.”

Research for Mencap’s Hear my voice general election campaign* shows that people with a learning disability have a political appetite and want to vote, but many are excluded from the process and aren’t able to exercise their democratic right.

This culture of inaccessible politics discouraged 64% of people with a learning disability from voting in local elections last May. Of those who didn’t vote, over half (56%) said they didn’t want to vote for any of the political parties because they didn’t understand what they stood for.

One of these individuals was 28-year-old Vijay Patel. Vijay felt excluded from politics because of the complex language that politicians use:

“I wasn’t sure who to vote for in the last general election as all of the parties were against each another and used big words with lots of jargon. The government needs to make sure their information and policies are in easy read for people to understand what they’re talking about. I’m looking forward to reading the Easy Read manifestos and making sure my vote counts!”

Lorainne Bellamy, who has a learning disability, works at Mencap (pictured). Lorainne read the Easy Read manifestos before they were finalised, to make sure that they were as accessible and informative as possible. She said:

“I went through the manifestos to check to see if they were in Easy Read. I read through the Labour and UKIP manifestos. The UKIP manifesto had a summary that was at the beginning, and it was very good because it explained some of the long words.

“It is important to have the manifestos in Easy Read because the words they use are not accessible. I would like to vote, so I need to understand who I am voting for.”

Mencap’s Hear my voice campaign is encouraging people with a learning disability, their families and carers to tell their local candidates what matters to them and what they want to see change under the next government. To date, over 1,000 people have shared their stories with their local candidates.

More than 460 political candidates have signed-up to the Hear my voice campaign to say they are listening to the voices of people with a learning disability.

You can find out more about the campaign here: www.hear-my-voice.org.uk