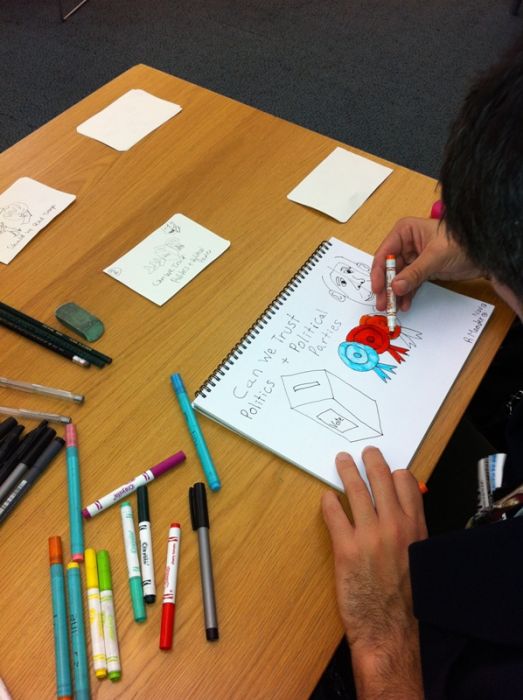 Are political parties trustworthy? Why do we send our army to other countries? Should the police have more training in supporting people with a learning disability or autism?

These were just three of the very important and varied topics raised by people with learning disabilities at an ‘Ask Your Question’ session run by national support provide Dimensions in Portcullis House, Westminster, on Wednesday. (November 20)

Organised as part of Parliament Week, about 30 people with learning disabilities and autism attended the session in Portcullis House . They had the opportunity to ask their questions of a panel of people which included a lawyer, a journalist, a campaigner and an MP.  It was the first ever ‘Ask Your Question’ designed just for people with learning disabilities and it led to many interesting debates around the topics.

During the debates, the audience members were encouraged to challenge bedroom tax, to stand up to hate crime and bullying and to talk to their local MPs. Asked about trusting politicians, Panellist MP Dame Ann Begg said: “Most people who come into politics come in for? absolutely the right reasons – they want to make the world a better place.”

One audience member shared that he had been helping to train the police about how to help people with leaning disabilities. Another said: “WE know what a learning disability is – police don’t.”

Panellist Saba Salman, social affairs journalist, said that things had changed a lot in terms of hate crime related to race but it was too slow for people targeted because they have learning disabilities. She added that more positive stories about people with learning disabilities needed to be in the media.

Steve Scown, Chief Executive of Dimensions, said: “This innovative event allowed people with learning disabilities to truly have a voice and be listened to. It is so important for their opinions to be heard and for them to be engaged in politics as much as possible. This way they can play their part in our democracy.

“Ask Your Question allowed people to feel included and get answers to their questions in an accessible and instant way. It was also encouraging to see that places for the session booked up so quickly, which shows a real enthusiasm and thirst for information about Parliament by the learning disability community.

“This shouldn’t be a one-off event. People with learning disabilities should never be marginalised from the real debates in society and I hope this paves the way for them to be more involved with Parliament.”

Graphic facilitators worked through the session to demonstrate through images and words what the debate covered, making the event truly accessible. Pete Le Grys said: “I am passionate about making debates and meetings accessible to people with learning disabilities and it was a privilege to be involved in Ask Your Question.

“There was a wide range of questions asked by the audience and I feel the panellists were rightly challenged by these. It offered a great opportunity for a variety of experts to be in one room where very topical issues were debated. I hope this event prompts other such opportunities for people with learning disabilities to get involved with democracy and Parliament.”

Audio clips, videos, quotes and images were all shared on twitter @DimensionsUK, #askyourquestion #parliamentweek For more information about the event, visit www.dimensions-uk.org/askyourquestion

Dimensions is also currently running a campaign to engage more people with learning disabilities with politics. Workshops are being held around the country in partnership with the Houses of Parliament Outreach Service. For more information, visit www.dimensions-uk.org/loveyourvote

Parliament Week is a national initiative co-ordinated by the House of Commons and House of Lords, and this year will include a full programme of activities taking place at Portcullis House in Westminster.

Dimensions is a not-for-profit organisation which supports about 3,000 people with learning disabilities and autism. For information, visit www.dimensions-uk.org or follow the organization on Twitter @DimensionsUK

TalkTalk raises £300,000 for Ambitious about Autism and the Digital Heroes Foundation

David’s One Page Profile helps him save his job