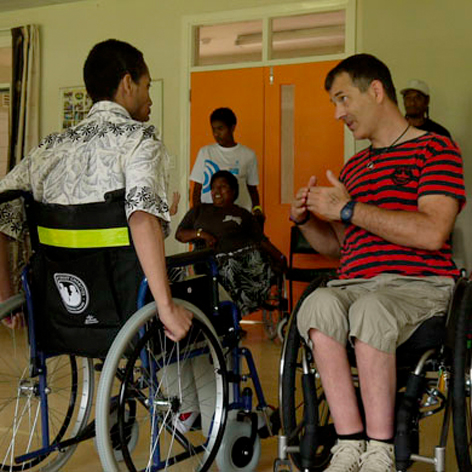 Peer-to-peer support is important when it comes to disability, and sometimes there’s nothing as valuable as connecting with someone who just gets it.

My first experiences had a huge impact on me, from the first person in a wheelchair that I spoke to after my spinal cord injury, and when I attended a wheelchair skills programme run by the Back Up Trust. It led me to become a trainer myself, and even to contribute to the training of other trainers.

When I reflect on my time in rehab, I realise that the process began with my fellow patients. There was a shorthand in ‘the nod’ at mealtimes, as if we were saying, “Yep. I get it.” During my stay in hospital I moved up the order, a little further through the process of trying to understand just what I was dealing with (a process that continues even now, 13 years later).

I would find myself talking up all the new things I had mastered, but I learned pretty quickly that half-filling someone else’s glass meant emptying my own, and that was emotionally draining. Over time, and through Back Up, I learned to lean as well as lift, and as trainers we supported each other.

After a few shaky moments where I relied on too much bravado, I finally got it. Sometimes, I had to shut up and listen. Sometimes, there was nothing to be said. Sometimes, the conversation about the hassles of driving or long-haul flying is actually about beginning the process of rebuilding a vision of the future that isn’t dominated by continence issues or chronic pain.

Those of us with disabilities inevitably negotiate the world in a different way, and that can be difficult for others to get their head around, or even intimidating, as people worry about saying or doing ‘the wrong thing’. Sure, we can be on a mission to educate, to demystify disability, to break down barriers, but that too can be emotionally expensive, and sometimes you just want a day off.

Or for the person who asks if you are “OK?” to understand that OK can be complicated. All of which leads me to highly value the contact that comes from someone who can nod and say, “Yep. I get it.” And because that’s an important part of my coping strategy, I make sure to pay it forward. We all should, because there are times when that will be the difference between whether we sink or swim.

Silver status for Regard