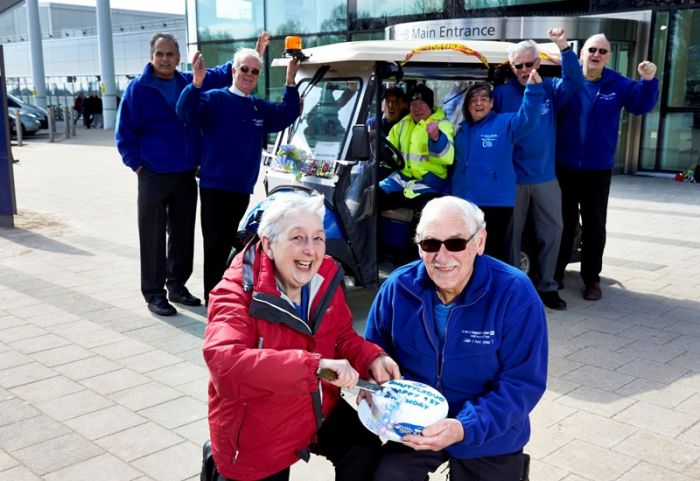 An adapted golf buggy is proving a huge hit for patients and visitors with mobility problems at a Birmingham hospital – with an amazing 14,000 passengers hitching a ride in its first year.

The electric buggy was introduced at the new Queen Elizabeth Hospital Birmingham in April last year for use by elderly and disabled patients.

The vehicle transports patients to the main hospital entrance from the nearby A2 car park and back again.

And the service is proving so popular that it carried 13,974 people during its first 12 months of operation.

The vehicle, which has been modified from a standard golf buggy by adding rain-proof covering, a safety bar, and a rear drop-step, has now been officially named following a competition among volunteers.

The competition was won by volunteer Jackie Henderson who came up with the name of Shuttle-bug. She was presented with a bouquet of flowers and a gift voucher during the official naming ceremony by Carol Rawlings, Associate Director of Patient Affairs at University Hospitals Birmingham.

Carol said: “We had a lot of comments from patients and visitors saying that while there are fantastic disabled parking facilities, it was a struggle for some patients with mobility or ill-health problems to get to the hospital.

“The last 12 months has been absolutely fantastic and has gone much better than expected. The buggy has helped a lot of patients and visitors over that time.”

The buggy, which has its own charging point in the A2 car park, operates from 09.00 to 16.00 hours, Monday to Friday. It can carry up to three passengers and is driven by volunteers who must hold a UK driving licence and be able to give two hours once (or more times) a week.

Dawn Roach, Voluntary Services Coordinator, said they had received positive feedback from patients who were “so appreciative” of the service. She said: “Patients comment about the distance they would need to walk from the car park and say they would ‘never make it without the buggy’, and that the drivers are very helpful.

“Some who have declined a lift on the way up from the car park are glad of a ride back down once they have left the hospital. Others cannot believe the service is operated by volunteers and offer to make a small donation.”

Competition winner Jackie has been volunteering at QEHB for almost three years, helping out on one of the wards on Monday afternoons.

The 66-year-old grandmother, who previously worked for a household insurance firm, said: “When I retired from work I thought I would just do one day at the hospital and see how I got on, but I found that I just love volunteering. I do other things, such as helping out at a local school, so am only able to do one day a week.”

Jackie had previously been treated in the old QE for breast cancer in 2007, adding: “They looked after me very well so when I saw they wanted volunteers I thought that was for me.”

She said she was “very surprised” to win the buggy naming competition, with Shuttle-Bug being chosen by the team of 12 drivers from a shortlist of suggestions.