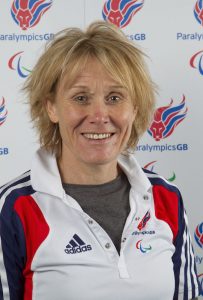 Penny Briscoe OBE has been announced as the Chef de Mission for ParalympicsGB for the next Paralympic Winter Games, to be held in PyeongChang in 2018.

Following on from her leadership role at the helm of ParalympicsGB in Rio, where Briscoe led the ParalympicsGB team to its most successful Paralympic Games performance ever, Briscoe will now take charge of the preparation of the team for the winter Games.

The ParalympicsGB Senior Leadership Team for PyeongChang is also confirmed today, with Tim Hollingsworth, Chief Executive of the BPA, to take the position of Secretary-General once again.

“Choosing the Chef de Mission for Pyeongchang was a simple and pleasurable task and in Penny we have a world-leading Chef in charge. I am delighted she has accepted the role.

“We have developed a successful leadership model over the previous three Paralympic Games and will continue to do so for PyeongChang. By splitting the leadership under the overall direction of the President into the team side, led by the Chef de Mission, and the organisation side, which I will be responsible for, we know we can get the balance right. It allows the focus of the Chef de Mission to stay rightly with the team while allowing the Secretary-General team’s focus to be on all aspects of ParalympicsGB’s presence at the Games off the field of play, including partner support, stakeholder and international relations.

“Both the Board and myself have complete confidence in Penny and her team’s ability to deliver the best prepared team to Pyeongchang in March 2018.”

Briscoe said of her appointment:

“It’s a huge honour to be appointed as Chef de Mission for PyeongChang and I am delighted to have the opportunity to lead our winter team once again. It’s a very exciting time for winter para sport and I am looking forward to supporting athletes and staff from both snow and ice sports consolidate the fantastic performances delivered back in Sochi. We have an ambition to be best prepared for every winter and summer Games and I will be working hard alongside colleagues to ensure this happens.”

Briscoe will be well supported as Chef de Mission, with an experienced leadership team appointed to assist her. Hollingsworth will be supported by Deputy Secretary-Generals Anna Scott-Marshall, the BPA’s Director of Communications, and Karl Reynolds, the BPA’s Commercial Director. Both Scott-Marshall and Reynolds held the same position at Rio 2016.

The position of President of the team, previously held by Tim Reddish as Chairman of the BPA, will be confirmed after the election process for a new Chairman has been completed on 28 February.