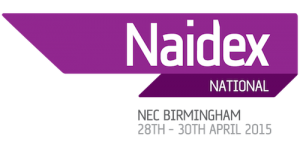 Paralympic world champion Hannah Cockroft MBE will open Naidex 2015 on 28 April at the NEC, Birmingham with an inspirational talk at 11am in the Multidisciplinary Theatre – she will also answer questions from the audience. Naidex, the UK’s largest event for independent living, will also host TV presenter, politician and former Paralympian Tanni Grey-Thompson OBE who is speaking about the launch of the Wheelchair Leadership Alliance also on 28 April at 11.40 am on the Trade Stage.

Hannah Cockroft is a T34 Paralympic wheelchair racer who currently holds the Paralympic world record for the 100, 200, 400 and 800 metres. She is a Double World Champion, Double European Champion and also won two gold medals for GB at the 2012 Summer Paralympic Games in London. Hannah will be talking about her global athletic achievements, her inspirations and how she felt when she received an MBE for her service to athletics.

Tanni Grey-Thompson is also a Paralympic hero and has won a total of 16 Paralympic medals. Grey-Thompson is now a life peer in the House of Lords and has forged a successful TV career, presenting on BBC Wales, BBC One and S4C. Tanni is chair of the new Wheelchair Leadership Alliance and will be speaking at Naidex about the state of wheelchair services.

The NEW Product Forum Stage runs on the 28 and 29 April in the middle of the Naidex show floor and will provide a series of short presentations and demonstrations covering key innovations and new products and services at Naidex. It will also provide hands on advice and top tips on moving and handling and support all elements of independent living.

Matthew Tingey, event director at Naidex, said: “We’re thrilled to have Hannah and Tanni speaking, along with a host of other Paralympic inspirational heroes at Naidex 2015. Their personal stories, along with a great range of experts and specialist services at the event, are aimed at helping support and improve independent living and providing real life inspirations for everyone affected by, or living with, disabilities.”

Paralympic athlete Jody Cundy MBE will join exhibitor Chartwell Insurance Services (stand C15) at the show this year. Cundy started his sports career as a swimmer, and in 2006 switched to cycling and has since competed in international events.

New Naidex exhibitor, ‘get living it’ (stand B03) will also welcome the Paralympic gold medalist, Josie Pearson MBE, to their stand on 28 April. Josie qualified for the summer 2012 Paralympics in the discus and club throw and is an ambassador for new access information website ‘get living it’. ‘Get living it’ is a new UK venue, facility and activity website, providing access information specifically tailored to the needs of individuals and families living with long term illness or disability.

Former world champion mountain bike trials rider, Martyn Ashton will also talk at the RGK stand (B90) to promote the new RGK ‘Play Life’ campaign. RGK will launch ‘Play Life’ at Naidex 2015, a new campaign focusing on the benefits of staying active in a wheelchair.

This year’s Multidisciplinary Theatre will also host novelist Valerie Blumenthal on 28 April at 2.15pm. Valerie will discuss her personal experience of being diagnosed with PCA Alzheimer’s after several years of living with the symptoms.

Naidex runs from 28 to 30 April 2015 at the NEC, Birmingham. Entry to Naidex, including Hannah’s talk on the 28 April, is free. For more information about Naidex and to register for a ticket, please visit www.naidex.co.uk.

Worry-free motoring with The Big Event