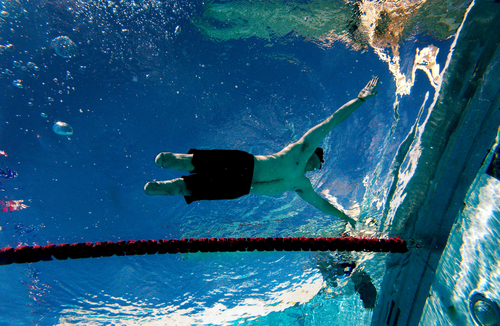 The future of disability swimming looks bright with more swimmers than ever with a physical, sensory or intellectual impairment getting on the pathway to the podium.

In November, 130 disabled swimmers attended nine Talent Identification Days across Great Britain, with British Disability Swimming asking, “Could you be a Rio 2016 Paralympian?”

Carole Barough, ASA National Disability Swimming Manager said: “It was fantastic to see so many new swimmers who turned out across England and had obviously been inspired by the Paralympic Games 2012. All the swimmers were signposted to the most appropriate opportunities for them to improve their skills and continue to enjoy swimming, some of whom showed real potential and could be Paralympians of the future.”

Connor Heath, an amputee, attended a Talent ID Day at Carmarthen Leisure Centre after being inspired by the British Swimming Heroes Tour earlier in the year. “I started swimming when I was about four or five years old and learnt through a family friend, then I started doing swimming lessons with my school. I watched the Paralympics and thought it was really good to see swimmers that have a disability like mine. I’d like to take part in a Paralympic games one day.”

Huw Griffiths, WASA  National Disability Manager commented: “In Carmarthen it was good to see younger swimmers being attracted into the sport, Connor has definite potential for the future, especially given his age. We are making arrangements for him to get into a club programme now.”

Scottish Swimming Disability Performance Development Manager, Paul Wilson added: “The Talent ID day at Stirling was a great opportunity to signpost swimmers who we’ve picked up for the first time. The impact of the Paralympics is apparent as younger and younger swimmers are coming forward eager to get involved”

Of the 130 swimmers that attended 74 have been directed to club opportunities and 56 have been pointed to Learn To Swim and Participation opportunities.

British Swimming is the National Governing Body for Swimming, Diving, Synchronised Swimming, Water Polo and Open Water in Great Britain.  It is responsible internationally for the high performance representation of the sport. The members of British Swimming are the three Home Countries national governing bodies of England (ASA), Scotland (Scottish ASA) and Wales (Welsh ASA).  British Swimming seeks to enable its athletes to achieve gold medal success at the Olympics, Paralympics, World Championships and Commonwealth Games.

All the highlights from the Rio 2016 Paralympic opening ceremony