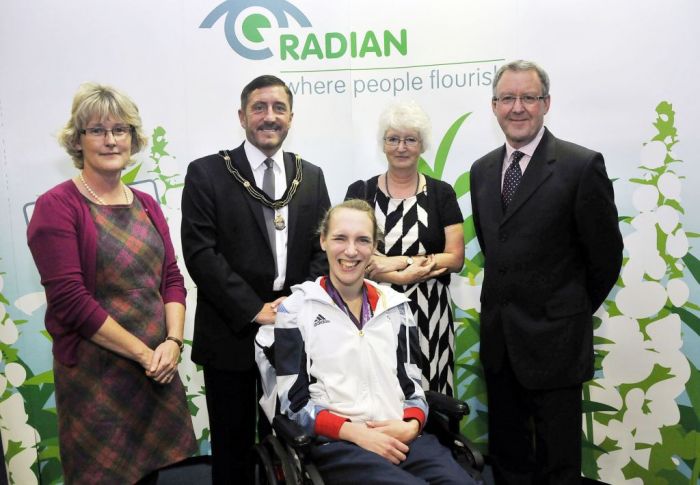 Eton Dorney was at the centre of celebration on Thursday 4 October as the Windsor and Maidenhead Volunteer Centre announced their winners of the Volunteer of the Year awards for 2012.

Local Paralympian Sophie Christiansen, who won an incredible three gold medals at this year’s Paralympic equestrian events, stopped by the volunteer centre to take part in acknowledging the work of local volunteers and the difference they make within their communities in the Royal Borough of Windsor and Maidenhead. All the nominees were able to have a picture with the medal winner and, of course, see the gold medals for themselves, with a lucky few even holding one!

This year, there was a magnificent 55 nominations with six awards on offer. Vivienne Davies was announced as the Overall Volunteer of the Year 2012 for her work as Chair of SportsAble, a charity based in Maidenhead dedicated to the promotion of awareness of disability through sport and recreational activity and the integration of disabled and able-bodied people. The ‘Under 25’ Group Trophy was presented to Tameena Hussain while Andy Small won the ‘25 to 59’ Trophy, and Sandy Ashton won the ‘60 and over’ category. SportsAble Section Leaders were the ‘Team Shield’ winners whilst Vicki Witt picked up the ‘Special Recognition Shield’.

Radian has a proud tradition of recognising the work of volunteers and has sponsored the event since 2000. Diana MacLean, Head of Region West, was in attendance to represent the Radian Group and she commented on the evening: “It was wonderful to see so many nominees and it is humbling to hear about the good work that all the volunteers do for their communities.”