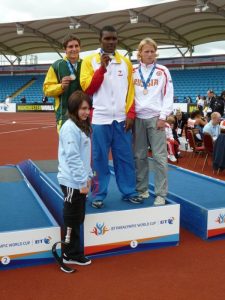 When schoolgirl Danielle Bradshaw chose to have her leg amputated last year, many couldn’t believe she was doing it. But now, one year on, the 12-year-old is showing the doubters what she’s made of…

While Danielle Bradshaw’s friends are planning sleepovers with their friends, she’s dreaming of Paralympic glory after an elective amputation last year.

The plucky twelve-year-old from Newton in Greater Manchester was born with congenital dislocation in both hips and her knee, with her right leg wrapped around her neck. Doctors had to cut the tendons in her knee to get her leg in place, meaning she had one leg shorter than the other and facing big challenges with her mobility.

Having had to use a wheelchair most of her life, Danielle was inspired by a documentary showing soldiers who had had amputations and then gone back to war. And so last year she asked her mum Debbie and step-dad Darren if she could do the same.

“When she said she wanted her leg amputated, I was shocked, definitely,” Debbie says. “But it just wasn’t something that phased Danielle. She’s been very brave.”

An elective amputation in an 11-year-old girl might seem extreme to some, but for Danielle, it just made sense.

“Before I had the operation, I couldn’t do anything. My leg was just setting me back,” Danielle explains. “I chose to do it because I wanted a new life and I wanted to live a normal child’s life.”

After consultations with doctors and child psychologists, the family decided to go ahead. In May of this year, she was fitted with a top-of-the-range running blade and she’s now in training with Paralympic coach John Dunne to get her on the running track at the 2016 Games in Rio.

The schoolgirl recently met athlete Oscar Pistorious, the world’s fastest man with no legs, who uses the same running blades as Danielle.

“He told me that I’m a real inspiration to him,” Danielle says. “And that I’ve got a better blade than he does!”

The running blades come in at £4,000 a time, and Danielle will need it replaced every twelve months as she grows. Debbie is aware of the investment, but she’s determined to help her daughter reach her goal.

“I know what Danielle is capable of achieving,” Debbie says. “She doesn’t let anything beat her.

“I hope she does make it to Rio 2016. In fact, I know she’s going to make it there. I can’t wait to see her up on that podium getting a medal. She’s amazing.”

Find out more about Danielle’s road to Paralympic glory at www.paralympicdreams2016.co.uk