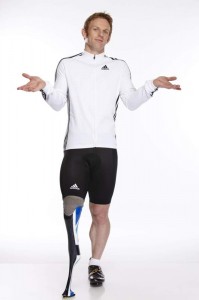 Paralympic cyclist Jody Cundy, who became a household name after London 2012, has linked up with specialist insurance broker Chartwell to advertise its range of policies.

Jody, 34, a world and Paralympic swimming champion before repeating the feat when switching to the velodrome, has been sponsored by the Norfolk-based broker for several years.

But now he is lending his name to a new advertising campaign that plays on his unfortunate false start in London, when officials denied him the chance to defend his 1km title won in Beijing in 2008.

The world record holder at the event, Jody’s wheel became trapped in the starting gate but, after raising his hand to denote a problem, officials refused to give him the second start that the rules allowed.

His frustrated reaction became the stuff of legend and showed the nation the passion behind four years of intensive training in Manchester alongside the British cycling team’s all-conquering athletes.

The series of adverts show images of Jody with the catchline “because things don’t always go according to plan”.

Gerry Bucke, general manager at Chartwell, which provides a wide range of cover for people with disabilities, said: “We’re delighted to have Jody representing the brand – he showed great mental strength to come back from such a disappointment to win bronze in the pursuit the very next day.

“Unfortunately, accidents do happen and, just as Jody picked himself up off the floor to win bronze, at Chartwell we not only provide great cover at affordable prices, but we’ll be there to help you when things go wrong.”

Jody, whose right foot was amputated as a child after he was born with a defect, was awarded an MBE in 2009, and said: “I’ve been very grateful for the support from Chartwell over the years, and I’m pleased to be able to help a company I’ve had a long association with.”

Of his London 2012 disappointment, he said: “It wasn’t my proudest moment, but it will go down in Paralympic history in the same way as John McEnroe’s outburst at Wimbledon in 1981.

“I basically threw all the toys out of my pram at anybody who would listen, in denial that I wouldn’t be defending my kilo title, and was removed from the velodrome.

“London will always be memorable for me for some amazing highs and some equally amazing lows, but I’m glad I can say I was there and I won a medal in front of the best and noisiest crowd anyone can ask for. What a year for sport, and amazing to have played a small part in it!”

He later apologised to the fans in the velodrome and is focused on regaining his crown in Rio in 2016, his sixth Paralympic games.

Have-A-Go. On Track for the 9th Annual LimbPower Games!