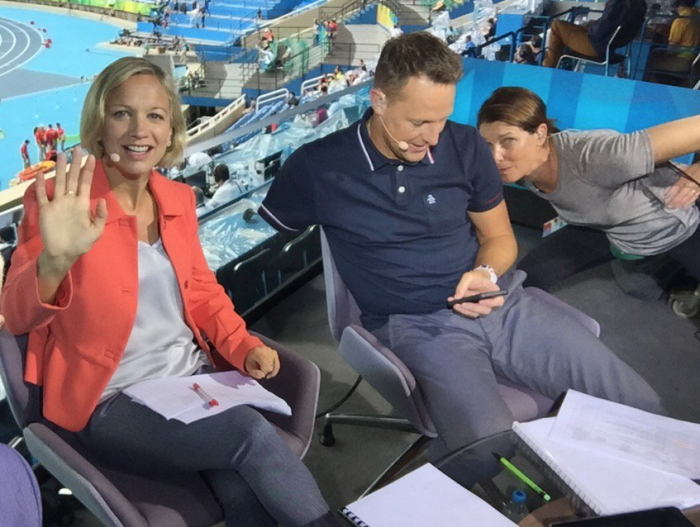 Sophia Warner on the far left, presenting at 2016 Rio Paralympics for Channel 4

Sophia Warner, who represented the UK at the 2012 Paralympics, took to Twitter to complain about her treatment on an easyJet flight. A member of the easyJet team asked the 43-year-old to ‘prove’ she had a disability when she boarded a plane in Milan’s airport to return home to London, and that she looked “normal”.

“I was told you look completely normal. Why do you need help,” she recounted afterwards. Warner, who has cerebral palsy, was understandably shocked and “cried all the way home”.

I’ve not complained on twitter before. The order to publicly prove my disability incident by @easyJet yesterday was beyond devastating.😪

Many of her followers were outraged on Twitter. Warner has mobility issues with her legs and left arm, and had asked for additional support when boarding the plane. Warner is a well known face in the para-athlete scene. She has competed in T35 sprint events, winning silver and bronze at the 2011 IPC Athletics World Championships in Christchurch, New Zealand, and is also the vice president of The Children’s Trust, a charitable organisation that supports children with brain injuries.

A spokeswoman for EasyJet commented: “We’re sorry to hear of Ms Warner’s experience. The agent involved is employed by Airport Handling and both he and they have assured us that he was trying to ascertain what assistance was required to help Ms Warner.

“However, this was clearly not handled as sensitively as we would have liked. We will investigate this with Airport Handling to ensure any lessons can be learned and changes are made to how they train their staff.”

Thanks everyone for all the kind words of support! @easyJet have been great so far & are on the case. 😊

A lot has to be done to combat insensitive comments by people that are genuinely hurtful.

Another one to check out is, End the Awkward, a campaign run by Scope in an attempt to make conversations less awkward when you’re unsure of what to say to someone with a disability.