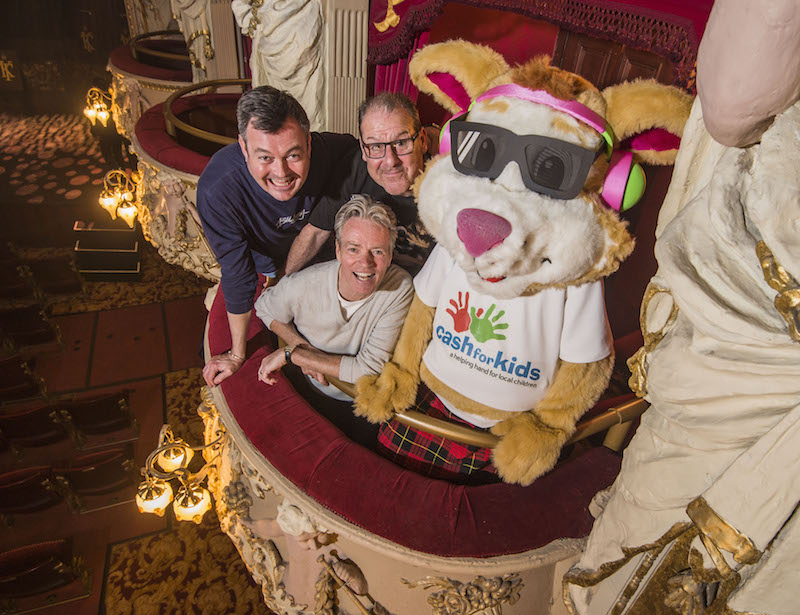 Radio Forth’s Cash for Kids today launch a campaign to fund the relaxed performance of the King’s Theatre Edinburgh panto for 2015/16, Snow White and the Seven Dwarfs.

The stars of the show – Allan Stewart, Andy Gray and Grant Stott – posed with the Cash for Kids mascot, Courage the Cat, to launch the campaign to take 1000 children and their carers from the city’s special schools to the King’s panto.

Following the success of the inaugural relaxed performance of the King’s Theatre Edinburgh pantomime in January 2015, Forth 1’s Cash for Kids is delighted to announce they will support the event again next year, and have today launched the fundraising campaign to raise £30,000 for the relaxed performance of Snow White and the Seven Dwarfs, to take place on Thursday 14 January 2016.

Launching the campaign at the King’s Theatre this week, where the panto stars are reunited to perform in Allan Stewart’s Big Big Variety Show, Allan Stewart said: ‘We’re delighted to be doing the relaxed panto again. We had such a great time last year – the children loved it and it reminds us all that theatre and panto is for everyone.’

The special panto performance is dedicated to the pupils of Edinburgh’s special schools and will welcome an audience of 1000 children and their carers from all eleven of Edinburgh schools for children with additional support needs: Prospect Bank, Redhall, Rowanfield, Oaklands, Braidburn, St Crispin’s, Kaimes, Gorgie Mills, Panmure St Ann’s, Woodlands and Pilrig Park.

Cash for Kids supported the first ever relaxed performance of the King’s Theatre panto in January 2015. Responding to the atmosphere at that event, Forth’s Mark Martin described the event on Forth 1’s Home Run show saying it was ‘a magical morning for children. If you ever wonder where the money you raise for Cash for Kids goes, it goes towards days like this that transform children’s lives.’

You can support the Cash for Kids fund for Relaxed Panto 2016 by visiting www.forth1.com/charity/relaxedpantomime

Relaxed performances are specifically designed to welcome people with a range of additional support needs including Autism Spectrum conditions and other sensory and communication disorders. There is a relaxed attitude to noise and movement in the auditorium and some small changes made to the light, sound and special effects of the show. An easy way to understand the atmosphere is perhaps, ‘the opposite of the quiet carriage on the train’.

Ann Marie Miller, Charity Manager for Cash for Kids, said: ‘We’re proud to be supporting this wonderful event for the second year running. Cash for Kids is a local charity, helping local children and the relaxed performance provides a fantastic opportunity for children across Edinburgh to experience the magic of panto in an environment specifically designed for them.’

Access All Areas present ‘The Misfit Analysis’ by Cian Binchy