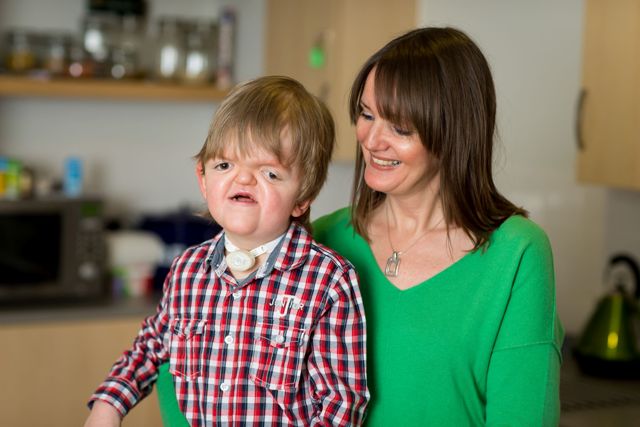 Mum Denise Mitchell tells us why she is supporting this year’s Jeans for Genes day.

Billy Mitchell is six and lives with his mum and dad, big sister Darcy and twin sister Lois in Hertfordshire. He is full of life, always smiling, has a cheeky sense of humour and loves cars – and he has undergone 49 general anaesthetics, has a tracheotomy and will need medical help and treatment for the rest of his life.

“I had the twins by caesarean section, and Billy was delivered first,” explains Billy’s mum Denise. “Just as they had stabilised him, they brought him in to me and showed me his hands and feet. All the bones were fused together in his fingers and his toes. He looked really unwell.”

Billy has Apert syndrome, a rare genetic condition which occurs in approximately one in every 65,000 live births. Apert syndrome causes premature fusing of bones in the face, skull, hands and feet, and has lots of additional complications such as intracranial pressure, sight and hearing problems, low muscle tone and mobility issues.

“At first, it was daunting, frightening, and really, really hard work,” Denise recalls. “He was immunocompromised, so he picked up every bug going. Looking after a child with a tracheotomy who gets pneumonia is just
unbelievable. You’re suctioning, you don’t get any sleep and you’re up all night.”

Despite his medical challenges, Billy attends a mainstream school and is in the same class as his twin Lois, where he i  thriving – when he first started, he was completely non-verbal, but now his speech is starting to come on.

“He’s so well-loved by all his little friends  at school, his teachers love him,” Denise says fondly. “His teacher was saying that Billy has learnt a lot this year, but they’ve learnt from him too. He’s touched a lot of people’s lives. He’s certainly changed his dad and I and how we think about things in life.”

Billy’s bravery has inspired the Mitchell family to lend their support to this year’s Jeans for Genes Day in support of Genetic Disorders UK, where members of the public are encouraged to don their denims at school or work
and make a donation to the charity. Part of the funds from this year’s appeal will be going to Headlines Craniofacial Support to produce a book which explains surgeries, examinations and treatment to young children affected by craniofacial conditions.

“The book will benefit families massively,” Denise says. “I think it’s very hard to explain to a child, and their siblings, what they’re going to go through. A book that’s written knowing what children are going through and describing it in terms that are probably different to how I would explain it, is going to be really beneficial. It’s a fantastic thing that they’re doing.”

About Jeans for Genes

Jeans for Genes Day raises money for Genetic Disorders UK, the charity that aims to change the world for children with genetic disorders. Funds raised will go to the vital care and support they need. Jeans for Genes Day is on  Friday 20 September and invites everyone to wear their jeans to work or school and make a donation. Sign-up for your free fundraising pack at www.jeansforgenesday.org

This year I will… get involved with Whizz-Kidz