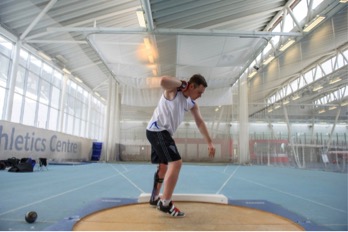 Ottobock is proud to introduce Jonathan Adams, a Paralympian who has competed in both the discus and shot put, as an Ottobock ambassador.

Jonathan, from Bury St. Edmunds, Suffolk, was selected to become an ambassador due to his fighting spirit. He has overcome a number of hurdles to get where he is today and through sheer determination and the help of a custom-made Ottobock Knee Ankle Foot Orthosis (KAFO) system, is now competing as a top-level standing thrower.

Jonathan started out in life with a difficult introduction to the world having been born nine and a half weeks early and then not long after diagnosed with Spastic Hemiplegic Cerebral Palsy, a neurological condition that affects movement and co-ordination. This meant Jonathan was in and out of hospital requiring medical treatment from the very start, for conditions relating to his premature birth, as well several surgeries on his leg throughout his life to counteract some of the symptoms brought on by Cerebral Palsy.

Jonathan started off – and for most of his life – using a wheelchair with a special helmet. He grew up having to adapt to the limitations Cerebral Palsy presented which hasn’t been easy and at times left Jonathan feeling trapped by a disability he didn’t understand.  He found that despite Cerebral Palsy being a condition which affects movement, dealing with the neurological effects was just as difficult as the physical. Jonathan explains, “While being diagnosed with a disability early in life you don’t realise that that isn’t how life should be, but as you get older the differences start to show”. Despite this he remained positive though his early years.

Jonathan felt that learning and adapting to his limitations brought him in accordance with what he considered to be normal. Jonathan attended The Hedgehog Club, a ‘not for profit’ company which helps children with Cerebral Palsy, and learnt basic skills such as posture and speech. He also became involved in sports while at primary school and took part in the Norfolk Youth Games. Jonathan was bitten by the sports bug and continued to compete in various youth competitions. This was to be the start of his inspiring career and impressive achievements.

But it wouldn’t be an easy road for Jonathan. During his childhood he spent several years in plaster to assist with his legs, had eye surgery to aid his visual impairment and had seven days a week intensive physiotherapy to try and develop his body to a point where he could live as unrestricted and as pain free as possible. Up until 2010, every single year of his life Jonathan went through at least one surgery on some area of his body.

2006 marked the start of a particularly trying time for Jonathan where he endured several surgeries on his legs and as a result left him unable to walk unaided for a long time. Despite all this by 2011 Jonathan still managed to prove he was a great competitor and was entered in the IWAS World Junior Championships where he won silver in both discus and shot put.

However, because of all his surgeries by 2012 Jonathan was forced to quickly retrain to enable him to compete as a seated thrower and went on to represent GB at the London 2012 Paralympics. Reflecting on his achievements Jonathan astutely suggests, “If you want something to happen, you need to go and make it happen.”

Jonathan was then forced to change back to a standing thrower after the 2013 season due to issues in the classification which meant he wasn’t able to compete on a level playing field with his rivals.

Jonathan was originally fitted with a day splint which malfunctioned just before he competed at the 2014 European Championships. After failed attempts to get another splint from his original supplier Jonathan was left with a severe tendinitis injury of his right knee which had a catastrophic impact on his ability to train, compete and function on a day to day basis; all amidst finishing his university degree in Social Psychology at Loughborough.

As a result of Jonathan’s performance he consequently had his funding withdrawn. This setback has allowed Jonathan to fight on with a renewed outlook towards athletics and is in pursuit of re-establishing himself among the world’s best shot putters.

This year, to ensure he was getting the stability he needed Jonathan was fitted with a custom made Ottobock KAFO system; a leg brace designed especially for him using custom made joints and bars that help provide stability and strength where the muscles can’t. The new KAFO made his left leg more stable and allowed him to make much better contact with the ground resulting in him being able to generate more power when releasing the shot put.

“Jonathan attended our private orthotic clinic in Burton Upon Trent which is run by our clinical partners Dorset Orthopaedic. From video footage it was clear that his left (non-throwing) leg was giving way when he was launching the shot put”, said Kevin Green, Business and Clinical Development Manager at Ottobock, “It’s fantastic to see the improvements the brace has made to Jonathan’s stability and ultimately his performance”.

Commenting on his brace Jonathan said, “I was instantly able to feel the difference for stability and I can get into the right position for throwing”. With the brace Jonathan is now free to concentrate on one step at a time which has relieved some of the pressure.

Having had many ups and downs throughout his life Jonathan is no stranger to dealing with the pressures of competing and advises, “When competing at these major events it becomes easy to get caught up with the notion of winning and losing but don’t get too high when you win and don’t get too low when you lose”.

Jonathan is now doing what comes naturally and despite not having any funding is remaining positive that he will get sponsorship soon and is looking to the future. His next goal is to go to the European Championships in 2016 and use that as a springboard for the 2016 Paralympics in Rio. Jonathan explains that, “The first step is to work hard towards selection and then on victory”.