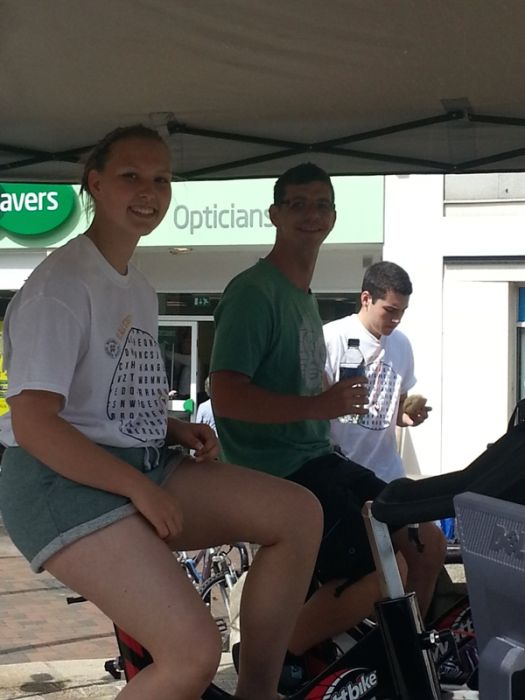 This week (Tuesday 12 August), 17 teenagers from Nottingham rode their static bikes 145 miles – the distance from Nottingham to Westminster – to help raise the profile of learning disability in politics ahead of the 2015 General Election.

The group also took the opportunity to raise money for a Derbyshire-based service called Friday Friends, which holds weekly social events for adults with a learning disability in Long Eaton.

The teenagers arranged the event as part of the National Citizen’s Service’s Summer Programme, in which they are all actively participating.

Josie, one of the teenagers who arranged and took part in the cycle event, said:

“Yesterday, our pedals flew the distance from Nottingham to Westminster, because we think that our Government has been ignoring the issues important to the learning disability community for far too long. But we’re just one small group of kids – and every voice makes us louder – so we want as many people as possible to join Mencap’s Hear my voice campaign.

“Approaching the finish line on the bikes, I had to dig deep to sprint the final mile, but the effort we had to put in is just a glimpse of the work that is still to be done until the voice of learning disability truly reaches Westminster.”

Rossanna Trudgian, Head of Campaigns and Activism at Mencap, said:

“What a day! These inspirational teenagers pedalled their socks off and put learning disability issues on the map. Their efforts really helped to raise awareness in the lead up to the 2015 General Election about how the serious issues that people with a learning disability face every single day are rarely, if ever, debated at election time.

At yesterday’s event, the teenagers also raised money for a Derbyshire-based service called Friday Friends, which holds weekly social events for adults with a learning disability in Long Eaton. The team of teenagers raised a fantastic £266. They will also be holding a big fundraiser this Friday 15 August to hopefully add to this total.

Julian Fennell, Area Operations Manager for Mencap in Derbyshire, Derby City and the East Midlands cycled for a few miles at the event. He said:

“Friday Friends is a social group for adults with a learning disability in Derbyshire. The service provides vital support for individuals to become active members of their community. For some, it is the only time they can meet with people in a safe and well supported environment. It is not funded so the group is very reliant on volunteers and donations to continue. I’d like to thank this group of inspiring teenagers for their tireless fundraising and also for supporting Mencap’s Hear my voice campaign in the process.”

To find out more about Mencap’s Hear my voice campaign, please visit: www.mencap.org.uk/hearmyvoice

People with a learning disability – and the millions of family members, carers and support workers connected to them – can make their voices heard on the issues that matter to them at the 2015 General Election. Hear my voice is a campaign designed to provide a platform for people with a learning disability and their families to make their voices heard. www.mencap.org.uk/hearmyvoice