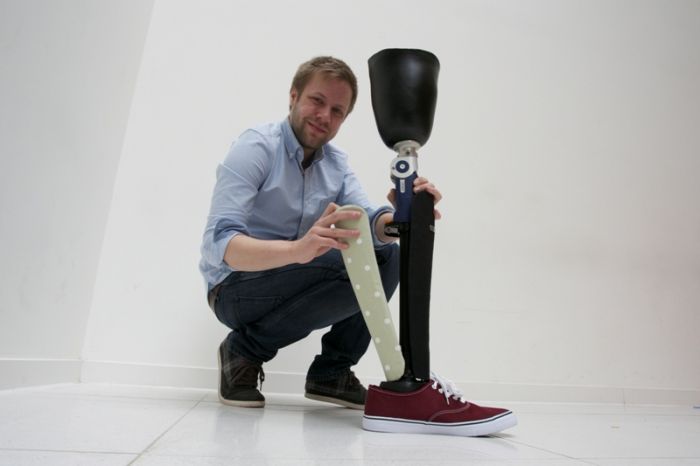 A student, who was inspired to help disabled people after his friend had a leg amputated, has constructed an artificial limb which features changeable cover to reflect a person’s mood.

Nottingham Trent University undergraduate Jonathan Bradshaw says his design, named Array, will enable people to develop an affinity towards prosthetic limbs as it allows them to choose a cover to reflect their own style.

The 23-year-old chose it for his major product design project after he became intrigued by the fact that some amputees use wheelchairs rather than artificial legs as they can dislike how they look.

His old school friend, Amy Bosley, who helped Jonathan with his research, had a leg amputated following an illness and also chooses to use a wheelchair rather than use a prosthetic limb.

Jonathan, whose work will go on show at Nottingham Trent University’s Art and Design Degree Shows 2013, which are open to the public between 31 May and 8 June, said: “There are so many reasons why people choose not to use prosthetic legs. From the research I have done, I’ve found that appearance is just as important to younger people as comfort and functionality.

“It’s my aim to increase the amount of choice that people have so that they can wear different covers for different occasions. For instance, people might like to have graphics on their limb for a night out, or have a skin tone cover for a more formal occasion. Others might like to wear a colour which matches their clothes, while some may want one with a leather finish.

“The beauty of the product is that it allows people to wear a variety of colours, patterns and textures to suit an occasion, their personality or how they feel on the day.

“Obviously not everyone would want to go for this, but for some people it could really help increase their confidence. It’s a move towards making prosthetic limbs much more consumer-orientated.”

The prototype features a removable casing system which provides protection to the prosthetic leg’s internal components. Featuring aluminium brackets, the casing clips on and off by hand and has a quick release mechanism. The changeable covers are attached to the casing with press studs and the quick release casing allows people to change the covers with ease by preventing the need to bend down.

Amy, 24, from Thatcham in West Berkshire, described Jonathan’s idea as a stroke of “genius”. She said: “It gives amputees the option to be individual and to change their leg depending on their mood; a bit like someone would change their shoes to fit what they fancy. The options available at the moment are limited and so any development in prosthetics would be a bonus.”

James Dale, principal lecturer in product design in the School of Architecture, Design and the Built Environment, said: “I’m really pleased to see Jonathan make such a success of this project; a design which will provide people with a potential solution to what appears to be a common problem for young amputees.”

Manor House to reopen after refurbishment

Alternative Futures Group is crowned Charity of the Year 2014