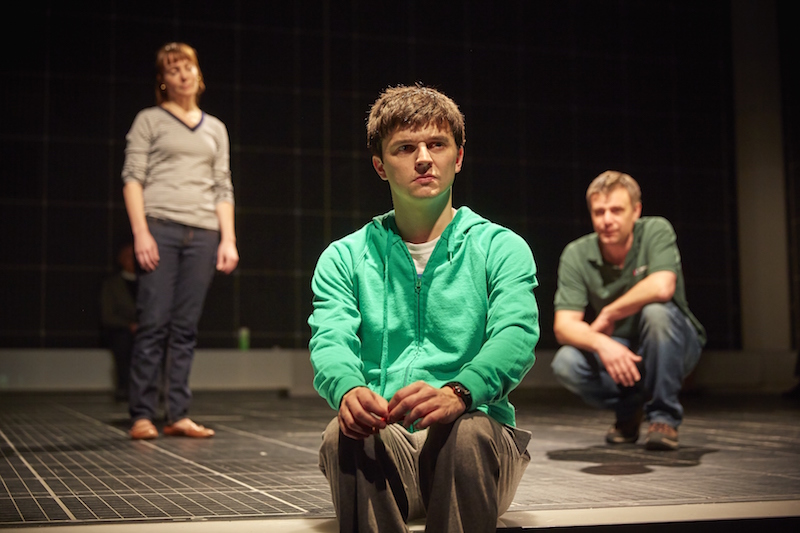 The National Theatre’s multi award-winning production of The Curious Incident of the Dog in the Night-Time, adapted by Simon Stephens from Mark Haddon’s best-selling book is making its Southampton debut at the Mayflower Theatre on 23 June where it will run for two weeks until 4 July as part of a 31 date tour of the UK and Ireland.    It is directed by the Tony and Olivier award-winning Marianne Elliott, who co-directed War Horse which played to packed houses at the Mayflower last year and is currently in its eighth year in London.

On 2 July at 2pm, the Mayflower Theatre will be hosting the only relaxed performance on the 31 venue tour.  The relaxed performance is presented in association with the National Autistic Society (NAS) and has been specifically designed to welcome people who will benefit from a more relaxed environment, including people on the autism spectrum and those with sensory and communication difficulties, or a learning disability.    At this performance there will be a relaxed attitude to noise and movement and some small changes made to the light and sound effects.   The staff and cast will have received autism awareness training and NAS volunteers will be on hand to help audience members in need of support. Many people with autism experience anxiety in new situations or environments so a visual story, outlining what to expect, has been developed to help prepare the audience for their visit.

The Curious Incident of the Dog in the Night-Time received seven Olivier Awards in 2013, including Best New Play, Best Director, Best Lighting Design and Best Sound Design and is simultaneously running at the Gielgud Theatre in London and on Broadway as well as on touring the UK and Ireland.

‘The adaptation was a really joyful experience. I knew two things in adapting the play. I knew that they key to it was the relationship between Christopher and his teacher.  Although it’s not that central in the novel, what struck me was that everybody in life has a favourite teacher.  Even people who hated school, even people who found school a miserable experience, had one teacher who they loved more than others and thought got them in a way that other teachers didn’t. I knew that if I could get that relationship right, then we could create an evening in the theatre that people could recognize themselves in.  The other thing that I knew was that Marianne Elliott had to direct it. I think she’s a visionary director, I think she’s a director of extraordinary imagination, but she’s also a very democratic director. This can’t be a piece of theatre that alienates people. It has to be a piece of theatre that you can come to if you’re 10 years old or if you’re 90 years old. It needs to appeal to people that have very high art taste in theatre, but also it’s got to be a family night out, and I thought that Marianne could release that really beautifully and really perfectly. Everybody working on it, the entire creative team, were united in wanting to tell Christopher’s story as honestly and properly as possible.’

‘All I ever wanted to do was to make Mark Haddon happy. He came to see rehearsals and the previews and the show at the National and in the West End and Broadway and he fell back in love with Curious Incident all over again. That makes me as proud as anything.

‘When I wrote Curious Incident I was absolutely convinced that it couldn’t be adapted for film or stage. The novel is locked into one person’s very insulated and profoundly mistaken view on the world. There are things Christopher doesn’t see and there are things he misinterprets, so the reader has to read into his reports of the world. Stage is radically third person. You can infer what people are thinking but you can only do so from what they say and what they do. So, I imagined a kind of spectrum with Curious Incident at one end and writeable plays at the other. Simon’s genius was to recognise that I was completely and utterly wrong.

‘Theatre is always about a place. It’s a group of people who’ve gathered there at one time to have an experience together. If you miss that evening, you’ve missed something that will never happen again. Real success isn’t everyone going away having had the same experience and agreeing about it.  It’s everyone having a good, interesting, moving or edifying experience and then going away and realising that the person next to them has had a great experience, but that it has been different.  That’s why Curious works so well on stage.

Marianne Elliott is an Associate Director of the National Theatre where her productions have included: War Horse (co-directed with Tom Morris), The Light Princess, Port, Season’s Greetings, All’s Well that Ends Well, Harper Regan, Saint Joan (Olivier Award for Best Revival, South Bank Show Award for Theatre), and Pillars of the Community (Evening Standard Award for Best Director).  Marianne was consultant director on The Elephantom for the National Theatre and also recently directed Sweet Bird of Youth for the Old Vic with Kim Cattrall.

Mark Haddon’s novel The Curious Incident of the Dog in the Night-Time was published in 2003. It was the winner of more than 17 literary awards, including prizes in Japan, Holland and Italy as well as the Whitbread Book of the Year Award in the UK in 2004, and was translated into 44 languages. A Spot of Bother, published in 2006, was also an international bestseller. As well as writing fiction, Mark Haddon’s first work for the theatre, Polar Bears, was produced by the Donmar Warehouse in 2010. He has written 15 books for children, published a first collection of poetry in 2005 and is an illustrator and award-winning screenwriter. The Red House, Mark Haddon’s new novel was recently published by Vintage in paperback.

Simon Stephens’ play Birdland recently ran at the Royal Court Theatre with Andrew Scott in the central role.  Blindsided premiered at the Royal Exchange in Manchester earlier this year.  His play Port (originally produced at the Royal Exchange and also directed by Marianne Elliott) was revived at the National Theatre’s Lyttelton Theatre last year.  His other plays for the National are Harper Regan and On the Shore of the Wide World (co-production with Royal Exchange, Manchester: Olivier Award for Best New Play).  His many other plays include Three Kingdoms, Wastwater, Punk Rock, Seawall, Pornography, Country Music, Christmas and Herons; A Thousand Stars Explode in the Sky (co-written with Robert Holman and David Eldridge); an adaptation of Jon Fosse’s I Am the Wind and Motortown.  His version of A Doll’s House for the Young Vic transferred to the West End and then New York in 2014. Simon is an Associate at the Lyric, Hammersmith.

The West End production of The Curious Incident of the Dog in the Night-Time continues at the Gielgud Theatre www.curiousonstage.com

Talking about The A Word