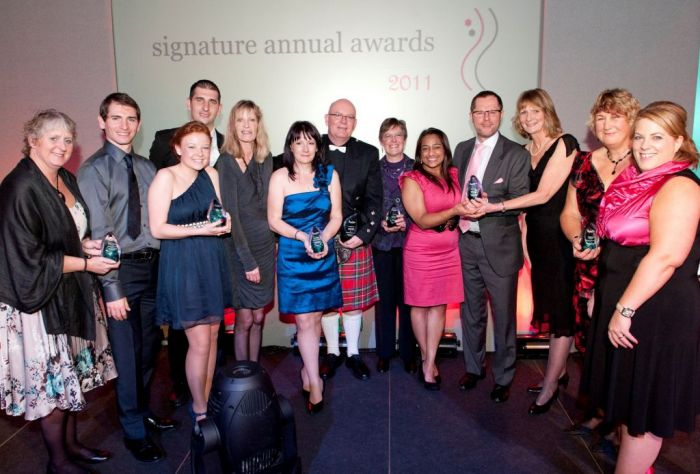 The UK and Ireland’s most inspirational deaf communicators will be honoured next Friday (November 2 2012) during the fourth Signature Annual Awards.

Hosted by Signature, the UK’s leading provider of British Sign Language (BSL) qualifications, the Signature Annual Awards celebrate the individuals and organisations leading the field in deaf and deafblind communications.

During the awards’ national final, which will be held in London next Friday, 42 nominees will battle it out across seven categories while the recipient of the prestigious Joseph Maitland Robinson Award for Outstanding Contribution will also be revealed.

Jim Edwards, chief executive of Signature, said: “Every year the Signature Annual Awards uncover some of the country’s most selfless people who dedicate their time to help create a society in which deaf and deafblind people are able to enjoy full access.

“Each nominee has a fantastic story to tell and they have all been nominated by members of their own community who have witnessed first-hand how their commitment to breaking down communication barriers is helping to improve the lives of other people.

“The 2012 Signature Annual Awards will be an extra special event for Signature as we celebrate our 30th year, so alongside honouring the outstanding work of today we will also be commemorating the progress of deaf communications over the past three decades.”

The 2012 Signature Annual Awards will also celebrate Signature’s 30th anniversary. Originally formed in 1982 as a research project in North East England, Signature has grown to become the UK’s leading provider of accredited qualifications in sign language and other forms of deaf and deafblind communication.

For more information on the awards and to view the shortlist, visit the 2012 Signature Annual Awards website at www.signature.org.uk/awards.

Living and learning with Multiple Sclerosis