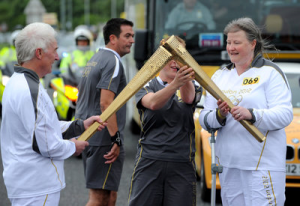 With London 2012 now over, the memories are still fresh in the mind of 39-year-old torch bearer Nicola Blithe – thanks to some out of this world technology!

For the past two years, wheelchair user Nicola has been living with a disorder called ‘regional pain syndrome’.

Nicola says: “I was walking on the beach throwing stones for the dog, as you do. And I stepped my foot down and got it caught on a stone, twisted my ankle and dislocated my ankle. I was taken to hospital in an ambulance, had the usual x-rays and everything else. They found out that I’d got an avulsion fracture and got put in a plaster cast for six weeks, and that’s basically how it started. That was about three and a half or four years ago.”

Nicola then spent the next two years visiting hospitals to see pain consultants and other specialists including Louis O‘Connor, Lead Physiotherapist at the Royal Victoria NHS Hospital in Belfast. There, he was diagnosed with complex regional pain syndrome. She explains: “Complex Regional Pain Syndrome is a disorder that can come on after any type of injury, and it can be from stubbing your toe, it can be from a severe break. Basically it’s a sympathetically maintained pain that stays after the injury has occurred, it stays with you and it doesn’t go away. So when you stub your toe, that burning pain that you get when you stub your toe? That’s what stays with me all the time. After a while the burning pain after stubbing your toe goes away? Well mine has never gone away.

“I learnt a lot from Louis about how to manage pain and was lucky to be asked to come back and to see Louis about eight months ago. This was just when the AlterG Anti-Gravity Treadmill was about to be installed into the gym and he thought that I would be a prime candidate to have a go.”

The wide range of uses for AlterG treadmills includes physical therapy, surgical recovery and elder care healthcare and maintenance.  The treadmills are also used by a large number of Premiership football and rugby clubs in the UK and in many Europe countries and by many elite athletes and  athletic programs, from Olympic distance runners and NFL, MLB and NBA teams to collegiate and University sports programs and the Olympic Training Centres.

The AlterG Anti-Gravity Treadmill uses differential air pressure that can ‘un-weight’ up to 80% of a person’s body weight, allowing for stable support during rehabilitation.

John Hammond, Clinical Specialist for AlterG, says: “The concept of the AlterG is fundamentally based on NASA technology of ‘Differential Air Pressure’. It’s based on a technique that’s familiar within the rehabilitation market which is partial weight-bearing, i.e. the ability to reduce the amount of weight going through one’s feet. NASA scientists looked at the weight-bearing status of their astronauts to help facilitate a training programme in space.”
The treadmill worked so well for Nicola that she was able to carry out her dream of carrying the Olympic torch through her village near Belfast before the Games kicked off this summer.The AlterG Anti-Gravity Treadmill works by filling a sealed chamber with air to offset a percentage of the weight of the person using it. It has two main functions: functional rehabilitation, promoting normal gait patterns whilst maintaining comfortable weight-bearing therapy. This allows people who have sustained injury, joint replacement or neurological conditions to regain function. And sports conditioning, for both injury and regular training, the AlterG allows its users to maintain high fitness/cardio levels without the sustained impact on the body of ordinary running. Muscles within your lower limb work the same as they would without the body weight support and that’s very unique to ’anti-gravity’ rehabilitation. This new technology could offer a lot of new opportunities for physiotherapists and their patients around the world.

Watch the video below to find out more about her experience.