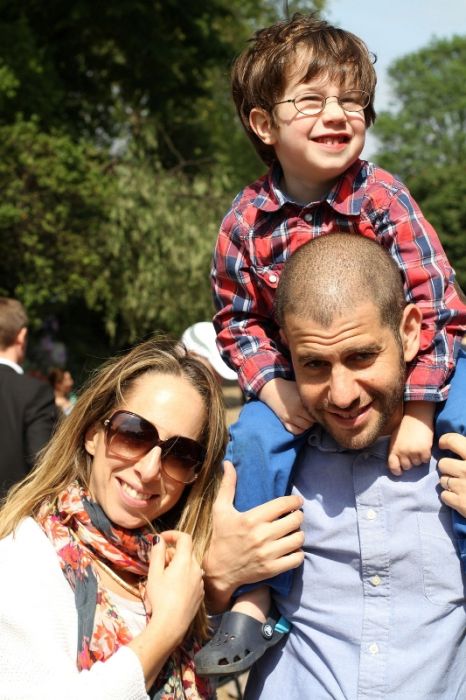 When Matthew Davis’s son Isaac was diagnosed with high-functioning autism at the age of three, the dad was inspired to try and make a difference…

Last year, Brent-based advertising agency partner and copywriter Matthew Davis decided it was time to speak up. There was so much that he and his family were experiencing that the majority of the general public would never understand, and would never really have to.

So, in October, Matthew launched his blog, My Son Isaac, which documents his family’s journey with autism.

The life-long condition, which impacts the way in which a person communicates and experiences the world around them, affects one in every 100 children – a fairly surprising statistic for something which is, on the whole, still relatively misunderstood.

Five-year-old Isaac is one of these children. When he was a toddler, Matthew and his wife Eliza noticed that he was taking a little bit longer to develop than other children his age.

“He was just not a happy little boy really,” Matthew explains. “He was two and a half and he had barely any words. There was also a lack of inquisitive or curious playing. He twiddled about with toys but never really showed any interest. He was very distressed a lot of the time. We couldn’t really read him particularly well, which was all down to the fact that he had a set routine in his head that we didn’t know about, so we weren’t adapting to his needs.”

Matthew and Eliza took Isaac to their local GP and the diagnosis process began. Initially they were told that he had global developmental delay, but further appointments pointed towards a diagnosis of high-functioning autism.

“He craves routine,” Matthew explains. “It’s absolutely the oxygen that keeps our family going. He needs to know what’s happening, who’s coming round, where he’s going. We’re aware that that could become a bit stifling, but he can be a bit flexible within those parameters.

“He speaks in a certain way and learns things in a certain way. He quite often says things that are scripted. He can be quite robotic in the way he speaks, he repeats things a lot, but one thing we’ve found, and certainly in the type of autism that Isaac’s got, is that intervention can make a huge difference. His potential could be really big.”

This is one of the reasons why Matthew launched his blog – to reiterate this message. Following Isaac’s diagnosis, Matthew got in touch with Ambitious about Autism, firstly through the charity’s Talk about Autism online community. On the site’s message boards, he spoke with other parents and shared his own family’s story – something that was almost therapeutic. He and Eliza were asked by Ambitious about Autism to speak up about their experience in order to raise awareness for the condition in the role of parent patrons.

Having toyed with the idea of blogging for a while, Matthew decided to seize the opportunity to launch his own blog, sharing his family’s autism story.

“Awareness is a big deal for me,” Matthew says. “People don’t know enough about autism. Things have improved drastically over the last 20 years but they need to improve massively again.”

Through learning more about the condition themselves and pushing for support, Matthew and Eliza have noticed a massive difference in Isaac. His speech has come on leaps and bounds, he’s now able to think two or three days in advance in terms of planning and routine, he’s enrolled in a mainstream school where he has a teaching assistant for support and, overall, he’s a very happy boy.

“He’s very funny, very active – doesn’t sit still!” Matthew says with a laugh. “He loves books – he’s always got loads of books with him. He loves counting and games, he’s always on the iPad. He loves trains as well. He’s got a great sense of humour, he’s very slapstick. People love being around Isaac, he’s a real ball of energy; a really happy, excitable child.”

As well as his parents’ determination, accessing the right kind of support has been instrumental in Isaac’s progress.

“My wife is absolutely the engine behind that,” Matthew admits. “She fought like a Rottweiler if I’m honest! She’s worked with Brent Council, worked with the school, really battled the system. The best thing was getting his statement of needs, which he got early on. That said that he needs a TA, you can ask for occupational therapy, speech therapy, that kind of thing. There’s an organisation in Brent, which has been absolutely brilliant – the Brent Outreach Autism Team, BOAT. Its job is to help support kids in mainstream school who are on the autistic spectrum. It’s an amazing resource.”

Autism has been a game-changer for the Davis family, but certainly not in a bad way. Matthew and Eliza don’t just have a bright, funny little boy – they have a heightened understanding of disability and other people’s needs too.

“Autism is everything,” Matthew admits. “It’s completely everything. The minute you stop thinking about autism, things start going wrong. And I very rarely do as a result. But it’s been a positive experience, for all its challenges. I mean, it’s difficult. I suffer from envy at times, and frustration, but it’s made me… I wouldn’t say a better person, but maybe a more thoughtful, considerate and inquisitive person.”

Matthew and his wife Eliza are parent patrons for Ambitious about Autism. The charity’s aim is to improve services for children and young people with autism, and works to increase awareness and understanding of autism spectrum disorders, campaigns for better support for people affected by autism and offers support to families across the UK. To find out more about the charity’s work, call 020 8815 5444, email info@ambitiousaboutautism.org.uk or head to the website at www.ambitiousaboutautism.org.uk. For further support from others affected by autism, check out the online community at www.talkaboutautism.org.uk

AKW takes on another challenge