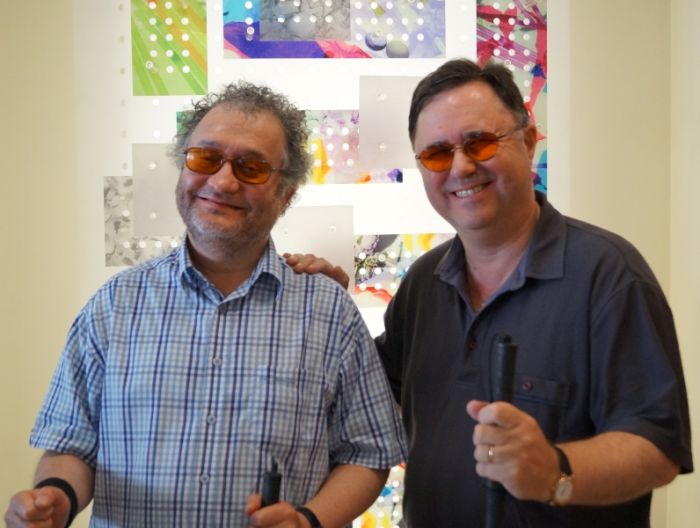 ‘Music for the Senses’ a classical and contemporary music concert by deafblind musicians Russ Palmer and Mark Pampel in support of Sense, the national deafblind charity will take place at the Cecil Sharp House on 13 September.

The double bill will start with Mark Pampel’s piano performance including his own classical compositions. Mark is influenced by composers like Schubert, Jarrett, Finnissy, Cashian and Messiaen to name a few. He has performed at the London Cultural Olympiad 2012 and plays with the LSO Create Orchestra and also performs own works as a member of the London Composers Forum.

Songwriter Russ Palmer will be performing his first album ‘Warm Summer Days’ and some of his favourite tunes on guitar along with musician Juha Sarkkola. Russ is a music therapist and consultant advisor in music research at the University of Helsinki and has recently played Parafest, a disability arts festival in Finland.

After the concert the musicians will be talking about how technology can help people with limited sight and hearing to experience and produce music. Russ and Mark will also be talking about the way they interact with music despite the fact that it seems completely inaccessible for people with sensory loss.

Mark uses powerful hearing aids to hear the piano solos that he composes. Mark’s hearing loss is doubled by being almost totally blind from a rare genetic condition, Usher Syndrome.

Mark said: ‘It probably seems unlikely that someone who is both deaf and blind could choose to perform music in public. There are a lot of misconceptions about what deafblind people can or can’t do. We want to use this fundraising concert as an opportunity to dispel some of the myths and show that it all comes down to the right support – whether that’s through technology or a charity like Sense.”

Russ who also has Usher Syndrome relies on cochlear implants to hear music in detail and is passionate about the positive effects music can have in people’s lives.

‘I think it’s important to talk about how people with different levels of sight and hearing loss can engage with music through the use of technology. Cochlear implants or hearing aids might not be suitable for everyone but there are always ways to adapt in order to enjoy and play music,’ Russ said.

‘Music for the Senses’ is on at Cecil Sharp House, 2 Regent’s Park Road, London, NW1 7AY, on 13 September, from 3-5:30pm. Tickets are £15 and are available online at www.sense.org.uk/musicforsenses

The funds raised from ‘Music for the Senses’ will allow Sense to continue to support deafblind people to access and get involved in the arts through its Arts & Wellbeing programme.

Sense is a national charity that has supported and campaigned for children and adults who are deafblind for over 50 years. There are currently 250,000 deafblind people in the UK. Sense provides specialist information, advice and services to all deafblind people, their families, carers and the professionals who work with them. In addition, we support people who have a single-sensory impairment with additional needs. Further information can be found on Sense’s website – www.sense.org.uk

Children and young people’s right to a short break

Disabled Adults Treated To “Beatles To Bark” From Harrogate Musician…And His Rescue Dog!