Eight new ‘Muscle Warriors’ joined the Class of 2014 as rubber was burned, tears were shed, and an unforgettable Porsche Muscle Dream Experience at Silverstone was had by all 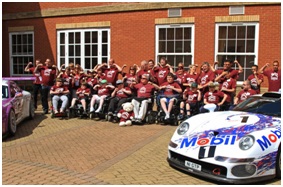 The boys, aged between 10 and 20, were all beneficiaries of the Muscle Help Foundation, a small family charity dedicated to providing highly-personalised, transformational experiences for children and young people suffering with the muscle wasting disease, Muscular Dystrophy and allied neuromuscular conditions. These eight boys suffer with the most severe form of the condition: Duchenne Muscular Dystrophy – they are unlikely to live past their early/mid twenties.

The boys and their families arrived excitedly at the hotel on the day, to be greeted by the Muscle Help Foundation’s 2014 Volunteer Hosting Team, bearing gifts of t-shirts and bulging goody bags. After a delicious lunch at the hotel, they had the chance to meet and have photos taken with top Porsche racing driver, Josh Webster, who recently won the Porsche Carrera Cup GB Standings, as well as having become an official Ambassador for the Muscle Help Foundation.

There were more surprises after lunch when two Porsche cars – one of which was Josh Webster’s actual racing car and the other a £1million pound privately owned Porsche GT1 – were revealed. Squeals of delight resounded across the hotel’s courtyard as the self-confessed ‘petrol head’ boys had a chance to see, touch and have photos of the cars (see photo above: credit – Peter David Hutchinson Photography 2014)

The piece de resistance came when they were driven to the world famous Silverstone circuit nearby, where experienced Porsche drivers took each of the excitable boys for a spin on the newly extended Porsche Experience Centre track, then onto the Grand Prix circuit in a Porsche 911 and then on an off-road track in a Porsche Cayenne. With the boys’ faces beaming with pleasure and smiling from ear to ear, this was followed by a slap-up celebratory ‘Muscle Warrior’ dinner back at the hotel where all the families stayed the night. The day ended with a presentation to each boy of a signed Lewis Hamilton photo (see William Arnott receiving his signed photo, right).

Michael McGrath said: “The sun shone, the energy was palpable and a fantastic day out was had by one and all! We are thrilled that, thanks to the amazing generosity of everyone at the Porsche Experience Centre and the staff at the Whittlebury Hall Hotel, we were once again able to change lives and give some hope and joy to our eight beneficiaries and their families. These boys are what this is all about; they are the VIPs and the spotlight was on them for the duration of this programme. It is such a privilege for my team and I to spend quality time with each of them and for their families to trust us with their sons. We will, I know, always remember their smiles and we look forward to ‘lighting it up’ next year. Bring on 2015!”

About The Muscle Help Foundation, Muscle Dreams and Muscle Warriors

The Muscle Help Foundation was co-founded by Michael McGrath (aka Chief Muscle Warrior), who is the CEO of the charity. Muscle Dreams are highly personalised experiences designed to give children and young people in the UK whose lives are afflicted by the muscle-wasting disease, Muscular Dystrophy (MD) and allied neuromuscular diseases the opportunity to live a dream or fulfil a cherished ambition. Website:  www.musclehelp.com