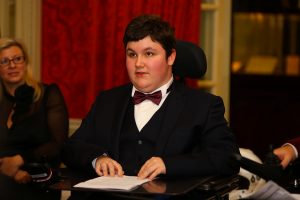 Scrivener joined other celebrities at the event, which raised almost £15,000 for this small specialist charity, rooted in family values, that delivers transformational, highly personalised, experiences in the UK known as Muscle Dreams for children and young people with muscular dystrophy (MD) and allied neuromuscular conditions.

Also in attendance to present unique auction items was Olympic rower and MHF Ambassador, Tom Solesbury, who competed in the quadruple sculls at the 2012 London Olympics. Herts-based presenter of TV’s ‘Fifth Gear’, Vicki Butler-Henderson donated a cherished driving helmet as an auction item and renowned Scottish crime writer, Ian Rankin, offered one lucky bidder the chance to become a character in his next novel, which he will start writing in January!

The evening began with a welcome by Fay Sharp, Chair of Trustees at MHF and MD of leading award-winning agency Zibrant. She was followed by a thought-provoking and informative insight into the charity’s work and impact by its inspirational CEO, Michael McGrath, himself diagnosed with MD at the age of 18; Michael is the first and currently only disabled person in the world to have successfully led expeditions to both the North and South Poles.

Michael talked about the beneficiaries to whom the charity has delivered ‘Muscle Dreams’, introducing 15-year-old William Arnott from Reading (pictured right) who, earlier this year, joined the charity’s Porsche Muscle Dreams driving experience programme, that saw 8 beneficiaries from across the UK experience the need for speed at the Porsche Driving Centre in Silverstone.

William, who uses an electric wheelchair, has Duchenne Muscular Dystrophy (DMD), the most severe form of the condition, and spoke about how being part of the MHF Porsche Muscle Dreams experience earlier this year has changed his outlook on life: “55 weeks ago, I underwent a successful, 9-hour operation to insert two titanium rods down either side of my spine, as my muscles were no longer strong enough to support it. For the next 4 months, I had to take things really easy and began to question if it had all been worth it, as I could no longer do the things I loved. I had been on the brink of an England place for my chosen sport of Boccia (like Boules), but now I couldn’t compete as I was suddenly not flexible enough to throw the ball as hard as I could before my operation. In early June, I went away with my scout group but I was unable to stay past the first night, as sleeping was so uncomfortable. This was another thing Muscular Dystrophy had robbed me of.”

William continued: “It was just after this that Mum and I heard about the Muscle Warrior applications. Then it happened! I’d been successful – I was going to Silverstone! Highlights of the day included meeting racing driver Josh Webster (an MHF Ambassador) who showed us his Porsche racing car. Then we travelled to the Porsche Experience Centre and looked at yet more fantastic cars. Then we were off, straight on to the Silverstone circuit, hitting over 140 miles an hour! I completed 5 laps and had an amazing day, and so did my parents who could also relax. Since then, I’ve been abseiling and down a zip wire and I’m striving to be back playing competitive Boccia very soon, as well as pushing for the GB squad for the Tokyo 2020 Paralympics. The day reminded me that with the right team and the right attitude, anything is possible.”

The fundraiser drew a large crowd who bid generously for an array of auction items that included:

Michael McGrath said of the night: “I’m thrilled with the response to our Annual Fundraiser this year! On behalf of the charity, sincere thanks to everyone, including our amazing volunteers who once again gave of their time so willingly to make the event run smoothly. My heartfelt gratitude to this year’s Muscle Warrior VIP William who spoke so eloquently and with such dignity; it was wonderful to see him again and meet his family.

And whilst not present, it was humbling and a privilege for the first time to ‘reveal’ our highest profile Muscle Dream experience … delivered in London just five weeks ago for 27yr-old Suhayl Afzal from Edinburgh who I know described his surreal meeting and interviewing of global movie icon and Hollywood film star Al Pacino as ‘momentous’ – this is exactly why we do what we do!

And finally, to our guest auctioneer Peter Scrivener who brought his captivating style, energy and good humour to the evening, making it entertaining and productive! As a small charity with extremely limited resources, we rely heavily on donations, people’s generosity and goodwill.

Whilst the funds raised will enable the charity to deliver more Muscle Dreams next year, our #657appeal is gathering momentum! We want to deliver 657 Muscle Dreams, one for approximately each muscle in the human body – so, if you are able to personally gift a regular monthly donation of just £6.57 or maybe you would like to Jump4MuscleDreams and raise £657.00 or perhaps the company or business you work for is looking for an opportunity to make a big impact in a small charity by engaging with us in helping to raise £6,570.00, you can do so knowing that you’ll be helping us change lives and give hope!”

About The Muscle Help Foundation

The Muscle Help Foundation was co-founded by Michael McGrath (aka Chief Muscle Warrior), who is the CEO of the charity. Muscle Dreams are amazing experiences designed to give children and young people in the UK whose lives are afflicted by the muscle-wasting disease, Muscular Dystrophy (MD) the opportunity to live a dream or fulfil a cherished ambition. Find out more at www.musclehelp.com

Long read: Disability, pregnancy and me