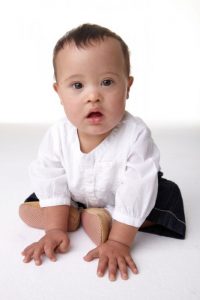 Gemma Andre burst into tears when she was told her daughter had won a place with a top children’s modelling agency – not just because it was a great achievement, but because Taya, who has Down’s syndrome, had been accepted…

When 16-month-old Taya Kennedy was signed up to a top kids’ modelling agency, many were quick to assume that the tot, who has Down’s syndrome, was there to satisfy the diversity quota. However, the casting agents at Urban Angels weren’t even aware that she was any different to the thousands of other children they’d seen. Taya got the job because she has star quality.

“There was nowhere on the form to say anything about disability, so I thought, well, why does it make a difference?” Taya’s mum Gemma Andre explains. “If they’re not asking, why should you tell them?

“When I told them that she has Down’s syndrome, they couldn’t believe it, but they said: ‘What an amazing story, we’re really happy that she’s on our books because she’s absolutely beautiful’.”

While Gemma was pregnant, Taya’s Down’s syndrome wasn’t detected, bringing a massive shock when she was born.

“I was devastated really, because I knew nothing about it,” Gemma admits. “The doctor said ‘I’m not going to lie to you, I think she’s got Down’s syndrome’ and then walked off. They don’t really educate you, you’ve got to do it all yourself. I had to stay in hospital for five days while we waited on the blood results coming back. It was like being in a whirlwind, I didn’t know if I was coming of going.”

Gemma was met by a wall of negativity. She was told that Taya would struggle to walk and her development would be slow. Despite this, she’s now close to taking her first steps, is babbling away and has ten teeth. While she does still struggle with her health – Taya was born with two holes in her heart and has a low immune system as well as breathing and bowel problems – she’s developing at a much faster rate than anyone could have predicted. She’s also set to take the baby modelling world by storm, with big names like Mothercare and Early Learning Centre already showing an interest.

“When people hear about Taya, they say ‘Oh, are you ok?’” Gemma says. “I’m not a victim. Don’t feel sorry for me. Yes, stuff can be hard, but she’s gorgeous and she’s happy. I wouldn’t swap my daughter for anything in the world.”

Part of the Enable #dontforget campaign.