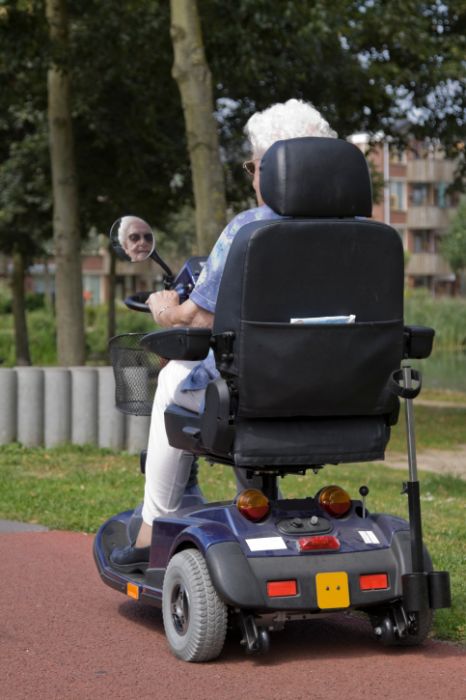 Britain’s growing army of mobility scooterists could face a regulatory double whammy with an MP calling for compulsory training and an EU mandatory insurance directive under discussion.

New figures from the Department of Transport revealed at least three people a week were injured last year in accidents involving mobility scooters, with five drivers killed and nine people who were not driving seriously injured.

In total, 164 accidents were reported, but the true figure is likely to be far higher as crashes are only recorded by less than half of UK police forces.

The figures prompted calls by MP Alison Seabeck for drivers to undergo compulsory training, while a European Union ruling has recently made it mandatory for all motorised vehicles to be covered by insurance.

Mobility scooters are classified as medical devices and are currently exempt from the Road Traffic Act, with no requirement for training, tax, MoT or insurance.

But all that could change if Ms Seabeck gets her way, and the EU ruling – which followed an accident in Slovenia in 2007 when a man was injured by a tractor on private land – comes into force.

The tractor driver’s insurers refused the claim, but the injured Damijan Vnuk successfully appealed to the European Court of Justice, which ruled that all member states must mandate insurance for all motor vehicles regardless of where they are being used.

Gerry Bucke, general manager at specialist insurance broker Chartwell, said that although not yet mandatory, inexpensive third party insurance for mobility scooters and electric wheelchairs could save drivers tens of thousands of pounds.

Court cases have involved settlements of £16,000 when a woman in Rhyl struck a Morrisons shop worker, and more than £32,000 when an 81-year-old woman suffered a fractured hip when she was knocked over by a scooter reversing into her.

“The costs of taking out a policy are relatively small, but the consequences of having no cover can be ruinous,” said Mr Bucke.

“Many home insurers exclude liability arising from incidents involving any motorised vehicle, so with personal injury claims so costly to settle it’s unthinkable to not have any cover at all.”

The best way to ensure comprehensive cover is to take out dedicated mobility scooter and electric wheelchair insurance, with a typical annual policy from Chartwell Insurance starting at £62.

This not only provides up to £2million of liability insurance, but also includes loss of or damage to the vehicle itself, including theft, overseas use, with mechanical breakdown and lost key cover available as options.

The DVLA’s own guidance states: “Although it is not a legal requirement, it is strongly advised to have insurance. Suitable schemes are not too expensive and are available to cover your personal safety, other people’s safety and the value of the vehicle.”

And Ms Seabeck, MP for Plymouth Moor View, said that training would help to reduce what she believes is a growing number of accidents with the 300,000 scooters on the road set to increase with an ageing population.

She told the Western Morning News: “With more and more mobility vehicles on the roads, the lack of knowledge amongst some users regarding safety and visibility, and in some cases poor roadworthiness, are all potential causes of accidents leading to injury and death.

“We need to know who is using these vehicles and training on purchase, whether privately or from a shop, should become a mandatory requirement.”

Norfolk Police have teamed up with Halfords and TV’s most famous mobility scooter user, Benidorm’s Sheila Reid (who plays Madge), to launch Safe Scoot, a training programme for drivers the like of which could become compulsory.

Sheila said: “Madge loves driving around in the sun on her mobility scooter, but I have often been surprised at how hard mobility scooters can be to control. In fact I’ve had several near disasters round the swimming pool while filming. As I have found, many mobility scooters have two speed settings and the high setting is surprisingly fast.

“I would strongly encourage all mobility scooter users to watch our Safe Scoot video. It covers all the most important areas to think about and master to ensure safe and accident-free driving for both you and other people. This includes manoeuvres such as starting, stopping, reversing, negotiating supermarket aisles and speed limits in pedestrian areas. It also demonstrates how you can get the very best from your scooter and your new-found independence.”

Insurance tailor made for people with disabilities