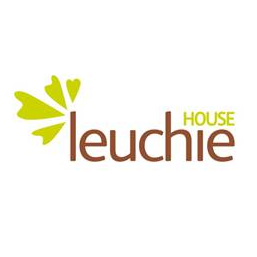 Gordon Aikman, the 29-year-old Scot living with Motor Neurone Disease and whose online campaign has been credited with influencing the First Minister’s decision to fund specialist MND nurses, has pledged his support for the work of Leuchie House.

On a visit to the unique facility which offers short break respite care to people living with a variety of long-term conditions, including MND, Gordon said: “Leuchie House is an invaluable escape for people who can feel trapped, isolated and alone as their condition progresses.

“It’s a fantastic facility for people of all ages to get together in stunning surroundings without feeling they’re in a hospital or clinical environment.”

Mairi O’Keefe MBE, the chief executive of Leuchie, and Rhona Brankin, a Leuchie trustee and former Labour MSP, welcomed Gordon to Leuchie, where he enjoyed lunch with guests before touring the building.

Mairi said: “As a fairly new charity, we recognise the difficulties in getting the issues affecting people with long-term conditions into the public eye. For Gordon to have made such progress whilst also coming to terms with his diagnosis is remarkable.

“We are hoping his attempts to influence policy will be a boost to our ongoing efforts as we seek to persuade the government of the desperate need for funding of short break care for people and their carers living with long-term conditions such as MND.”

Gordon, a former policy and communications adviser to the Scottish Labour Party and director of research for the Better Together campaign, has harnessed his experience and influence since diagnosis last year into his campaign, Gordon’s Fightback.

The campaign has so far raised over £100,000 for MND research. To donate, go to www.gordonsfightback.com

Glyn gets what he wants this Christmas