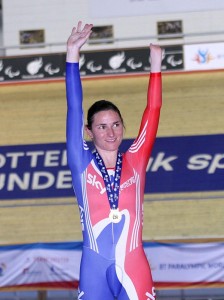 “The mission was to win four golds from four events. Yesterday was mission accomplished.”

The words were Sarah Storey’s on Friday morning, the day after she completed her quartet of Cycling golds. But the same applies to the whole of ParalympicsGB whose athletes came to London 2012 with a collective goal – to win more medals than they did in Beijing, from more sports, and to finish second in the medal table.

They hit two of those targets with three days to go when GB’s medal counter clicked over to 103, and today that total topped out at 120 as David Weir and Shelly Woods wound-up Britain’s campaign by adding one more gold and silver to the tally.

In all, Britain’s Paralympians have won medals from 18 of the 20 Paralympic sports, while Weir’s Marathon victory on The Mall, his fourth gold of the Games, ensured that ParalympicsGB finished just short of Russia but with more medals than any country apart from table toppers China.

If not quite mission accomplished, it was, at the very least, mission complete.

“We have smashed our medal target,” she said. “And more sports have delivered medals than ever before.

“We are third in the medal table, which does rankle just a tad,” she admitted. “But we are ahead of all our closest competitors in terms of total medals won.”

Weir’s Marathon win brought Britain’s golden tally to 34, eight fewer than in Beijing but in a world where Paralympic sport is growing ever more competitive. Britain’s 43 silvers compares to 29 four years ago, while in 50 per cent of of those events where Britons finished second it took world or Paralympic records to beat them.

Britain finished above Ukraine and Australia, with USA snapping at their heels.

“These have been the most competitive Paralympic Games ever,” said Briscoe, pointing out that six nations have won 30 golds or more at London 2012.

“We’ve seen the return of USA and Australia as forces in Paralympic sport, and the continued rise of Russia and Ukraine.

“We’ve stood toe-to-toe with all those nations over 11 days. Eleven days of slugging it out does take its toll, no medal has been easy, yet 46 per cent of our athletes in individual sports have won medals and we’ve taken medals in a quarter of all events held.

“Performances have been exceptional. We’ve been part of the most successful Games ever as world standards have risen in ways we would never have imagined, shown by more than 200 Paralympic records in the pool.”

For ParalympicsGB, she concluded, it has been “a very successful and hard-fought Games. We should all be proud of our athletes and their achievements.”

It was also a Games that captured the hearts and imaginations of the public like no Paralympics before, breaking records for attendance, atmosphere, noise, enthusiasm, coverage and sheer joy.

Win or lose, British Paralympians were cheered to the rooftops, and where there were no rooftops, they were cheered to the skies. Roared on by passionate fans in packed arenas, Britain’s athletes rose to the challenge at a Games that showed the intensity of Paralympic competition swelling and spreading across the globe.

Not all 20 GB teams achieved the goals set for their individual sports, but many did.

Paralympians in Athletics, Cycling, Equestrian, Judo, Powerlifting, Sailing, Shooting and Table Tennis all finished with more medals than they won in Beijing four years ago, while Athletics took 11 golds compared to just two in 2008, and Equestrian matched the five gold medals they won in Beijing as every rider left with at least one around their neck.

In Cycling, GB’s pedallers took 22 medals, two more than in Beijing despite having fewer events to contest. In Equestrian, GB’s riders maintained their utter dominance of the Team title, winning gold for the fifth time.

With two medals, the GB judokas had their most successful Games for 16 years; in Table Tennis, Will Bayley’s stirring silver, plus three bronze medals, made London 2012 that sport’s most successful Paralympics; in Sailing the GB crews won gold and bronze, Britain’s first ever on the water; and in Tennis, Lucy Shuker and Jordanne Whiley became Britain’s first ever female medallists.

“Huge congratulations to all our sports,” said Briscoe. “Congratulations to Sailing for winning their first medals, to Table Tennis who delivered four, and to Powerlifting, who also came to the party.”

In all, Britain topped the medal tables in Cycling, Equestrian and Sailing, while in Athletics, GB went from 17 medals to 29 in one four-year cycle.

Not everything British Paralympians did was successful and some long eras came to a close, not least the reigns of Lee Pearson in grade Ib Dressage and ‘Quadfather’ Peter Norfolk in Wheelchair Tennis. Nigel Murray announced the end of his Paralympic career after missing out on Team and Individual medals in the BC2 Boccia.

But these Games also launched Britain’s next generation of ‘superhumans’ (to steal Channel4’s phrase), not least sprinters Jonnie Peacock and Hannah Cockroft who lit up the Olympic Stadium where Weir crowned his illustrious career with three of his four golds.

Natasha Baker – inspired by watching Pearson as a 10-year-old – lived her dream in the dressage arena, winning two golds at 22 in her first Paralympics, while swimmers Hannah Russell and Jessica-Jane Applegate were just two of the teenagers to win medals in the pool.

“The success of our Talent ID programme over the last cycle has shown through,” commented Briscoe, naming Rowing champion David Smith and Peacock as just two of the athletes to emerge since Beijing.

“Fifty-four of our medallists were 22 or under,” she added. “It all bodes well for Rio.”

In gold medal terms, Weir and Storey emerged as the two most successful members of ParalympicsGB, while Storey achieved the remarkable feat of winning her 11th Paralympic gold, her 22nd career medal from two sports over six Games – surpassing Tanni Grey-Thompson as Britain’s most decorated female Paralympian.

Britain had multi-medallists in many sports, from Storey and Weir to triple winner Sophie Christiansen, London 2012’s most successful rider.

Ellie Simmonds – a relative veteran at 17 – repeated her Beijing brace, adding silver and bronze for good measure, while Baker and Cockroft leave London as double champions.

Even in sports where GB athletes didn’t mount the podium, they pointed to the future. In Goalball, Sitting Volleyball and Fencing Britain emerged with credibility and pride against far more experienced opponents, and are already setting their sights on Rio.

So too are the British Paralympic Association, as chief executive Tim Hollingsworth emphasised.

“We are on a journey, not at a high water mark,” he said. “The London Games has been unique, and some sports have had possibilities here with host nation slots.

“But our focus is the same, it’s on continuing that journey.”

But the numbers only tell part of the story of these Games, for ParalympicsGB had another, less tangible, goal for London 2012 – one of perception and change.

ParalympicsGB chef de mission Craig Hunter said on the eve of the Opening Ceremony, that London 2012 is about “using the power of sport to change the way people think about disability sport, and disabled people in general”.

Today he thanked “the great British public who bought the tickets and supported our athletes like at no other Games”. “I don’t think any of us imagined we’d see the Park quite so packed and the venues so full,” he said.

For Hollingsworth the Games have not just been a celebration of individuals and their achievements.

“More important is what it means,” he said. “It’s not just the pictures of our medallists that are out there now, but how the pictures are used in the next six months, and the next year, to inspire others.

“We are hoping to inspire a generation, not just about disability sport but about what it’s possible for people to achieve.

“Our inspirational athletes have sprinkled their stardust on that ambition, and our task is to use that as we move on from the Games in a world of widened perceptions.”