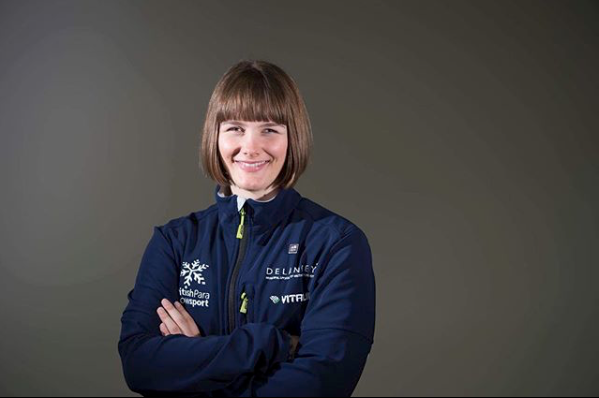 After successfully picking up a gold medal during the World Alpine Para Championships last February, Millie Knight is now getting ready for PyeongChang. At only 18 years old Millie has already achieved a lot in her short career – not least representing ParalympicsGB in Sochi 2014 as the youngest GB contestant to date.

The visually impaired skier packed a lot into 2017, including recovering from two major crashes and spending the summer training with her guide Brett Wild. Through the highs and lows could the upcoming Winter Paralympics be Millie’s shining moment?

We caught up with Millie and Brett ahead of the selection process to find out how they’re getting on in training.

Tell us a little bit about alpine skiing.

Millie: Alpine skiing has five disciplines. We have downhill skiing which basically translates to getting from the top of the mountain to the bottom as quickly as possible – that’s the fastest one and there are jumps too so it’s really quite exciting. Then it goes down to the slowest one, which is slalom and has as many turns as possible. As I’m visually impaired, I ski with Brett (Wild) and he skis about two or three meters in front of me and we communicate through Bluetooth headphones in our helmets.

How did you first get involved with alpine skiing?

M: I lost my sight at six and my mum decided to take me skiing at that time and I got the bug for it and just wanted to ski as much as possible. I was invited to go on a training camp with British Disabled Development Ski Team in 2012, just after the 2012 Paralympics in London, which was a massive inspiration for me.

I was very young at Sochi so the reason for going was to gain the experience so I was ready for 2018. It was a massive eye opener really and there was no pressure on me at all. It was just basically to see what it was all like and learn from it. I think it has given me an amazing insight and preparation for the games.

Brett, you’ve been skiing with Millie now for around two years, how do you help her on the slopes?

Brett: I tell Millie what’s coming up, what I can see coming up, when to turn, any technical parts of the course. We do a course inspection where we both scope out the course ten minutes prior to racing it and that’s where we decide the challenging sections, key buzzwords to remind Millie of where we are, the pressure of the course.

We are too cool…

M: I will then say back to Brett whether I can still see him, if our distance is good or whither we need to draw back our distance. I will also say if we’re going too slowly or too quickly and that all happens within a fraction of a second.

It seems like a very fast paced sport with a lot of trust needed between you both. How vital is communication in the sport?

B: I’m in the Royal Navy – I have been released for two years to do this – I think the key skills I developed, specifically communication has extremely helped in this role. I think it is extremely important that I am clear and confident at all times and strict with Millie. If there is any point where I’m not clear or confident Millie will lose the trust that she has to have in me to ski at 80mph with limited vision.

M: I’ve been skiing with Brett for two years now and the more time we spend together on and off snow it really builds that relationship we have and it makes communication much easier.

The Winter Paralympics in PyeongChang is just around the corner. How is training going?

M: Training is going well at the moment. Last season I had two major crashes and the last one resulted in a severe concussion so that took five months to recover from but since then we’ve had a few training camps and we’re back stronger than we were. It is looking positive.

We’re currently out in Austria. This is the place we had our holding camp before the games in 2014 so I know it quite well. It is a great venue because we can train a majority of our disciplines.

B: I think also the team are fantastic. Every single camp that we go to, they try to get us out training in similar conditions that we will be skiing in the Paralympics. We are training in a lot more venues, where possible, because there isn’t that high altitude in Korea.

ParalympicsGB have a fantastic set of athletes hoping to go to PyeongChang. Are you hoping more Paralympics coverage will boost the sports popularity?

M: Since London 2012 the publicity of Para sports has dramatically increased and I think with programmes like The Last Leg it’s really raising awareness, I think it’s really helped. We’re getting a few hours of coverage at the Games so a lot of people will be able to see it and that’s exciting.

What would you say is the best part of alpine skiing?

M: I love the speed that we go at and I like the adrenaline and the nerves that build up before the race. That’s something you can’t really experience anywhere else in your life.

B: I would agree. With a lot of other races there aren’t that many spectators. When we were at the World Championships as soon as you cross the line – there is a rule that when competitors are skiing there is no music playing, it is totally silent – as soon as we stopped the whole place erupted. The noise was deafening actually with thousands of people down there – that was just such a surreal experience.

Do you have any challenges that you need to consider when going to the Winter Paralympics?

M: I think because we had a really good season last season at the Commonwealth Champions there is a little bit more pressure on us. I think psychologically that is going to be much harder to deal with.

B: The challenges are the same as Millie mentioned. Just trying to relax Millie at the start gate and making sure that the pressure doesn’t affect her run. I’m sure we would both hate to get to the bottom and know that something like that affected our central chance of a medal. Keeping both of us level and do what we can to do well.

M: In regards to our hopes for PyeongChang, we don’t have any medal-related goals because that just puts unwanted pressure where we don’t necessarily need it. Discussing with our sports psychologist about our goals if we can get across the line, everything’s great and we’ve done our best then there will be no regrets. That is definitely the most important thing and then the results will speak for themselves.