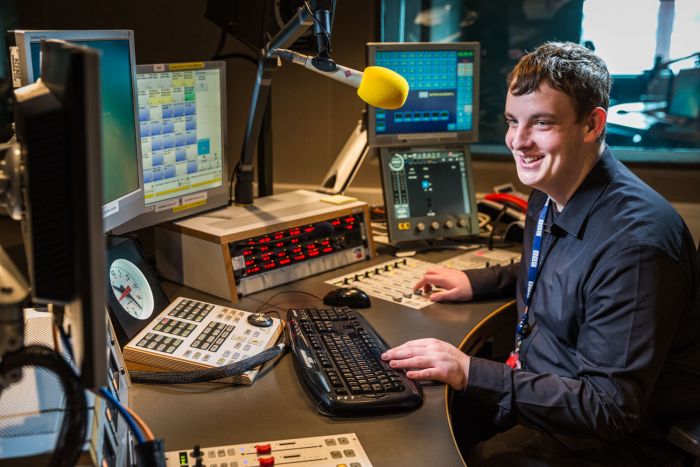 “My advice for anyone who’s thinking about applying for an apprenticeship is definitely three words: take the plunge.” –  Stewart Campbell, Modern Apprentice Creative and Digital Media, BBC Scotland

Producing content for live TV and radio is all in a day’s work for Milngavie lad Stewart Campbell.

The 22-year-old is giving his career a head start with a Modern Apprenticeship at BBC Scotland, working across a range of departments including Sport, Comedy and News.

Stewart, who is profoundly deaf, says the best bit of his apprenticeship is working on events such as Children In Need and visiting the set of Still Game with the likes of Ford Kiernan and Greg Hemphill.

Originally, the former Douglas Academy pupil wanted a job in hospitality but after a Pathways course to Creative Industries, Stewart felt his future was in broadcasting.

When Stewart thought of applying for a creative apprenticeship, he initially wasn’t confident enough.  However, following a week’s work experience at BBC Scotland where he spent time with his future apprentice mentor, he decided to go for it.

No two days are the same for Stewart at BBC Scotland – one day he could be researching for a programme, the next working on a high profile event.

“As well as that, since starting my apprenticeship my attitude to my disability has changed. As a deaf person, I can’t telephone people and so when I was working on programmes booking contributors I mainly communicated with guests by emails and instant messenger.

“I’ve found there are lots of ways to support and assist me in the workplace.”

“My advice for employers is to embrace apprenticeships – it’s about collaboration, communication and opportunity. The apprentice learns from you and you learn from the apprentice.”

Recently, Stewart has started up lunchtime sign language classes for BBC colleagues where he teaches British Sign Language. Not only are his classes extremely busy, one attendee ended up using his new found skill to communicate with an auditionee!

Stewart’s mum Carol said: “The apprenticeship has been absolutely incredible. Stewart was one out of 1,300 people to get it. We are so proud. He goes to work happy in the morning and comes home happy at night. We’ve seen his confidence grow and it really has been such a fantastic transformation.”

Find out what it’s really like to do an apprenticeship from Stewart.

Look Beyond the Label