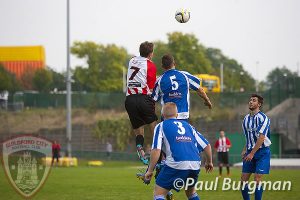 Monday 8th September 2014, Guildford City FC recently announced that they would partner halow this season and beyond as part of their ongoing commitment to the local community.

The latest home game for Guildford City FC resulted in a loss however, this did not dampen the spirit of halow project young people and their families who, along with Guildford Mayor, Councillor David Elms and a host of local VIPS, sponsors and business people turned out in force to support the team.

The Mayor, Councillor David Elms said on the day: “ What a wonderful partnership idea and how marvellous that so many young people and their families from halow supported the team. The work halow does is incredible and I am very happy to lend my support to such a worthwhile cause.”

Trustees of halow project Martin Day and Georgie Hill explained how halow started 8 years ago with five families identifying a need for such a project in Surrey to support young people with a learning disability to live as independently as possible. “ We are truly delighted to be involved with the local club which welcomes our young people as supporters and volunteers. The opportunity to spread the word about halow and recruit new supporters is a great help to the charity.” Georgie and husband, Damon Hill OBE are founder members of the charity and are well known as advocates for young with learning disabilities in the local area.

The halow project is a Guildford-based charity committed to supporting young people with a learning disability to have the same life choices and chances as any other young person.

If you would like to make a donation, refer a young person or require further information, please visit: www.halowproject.org.uk or call 01483 447960.