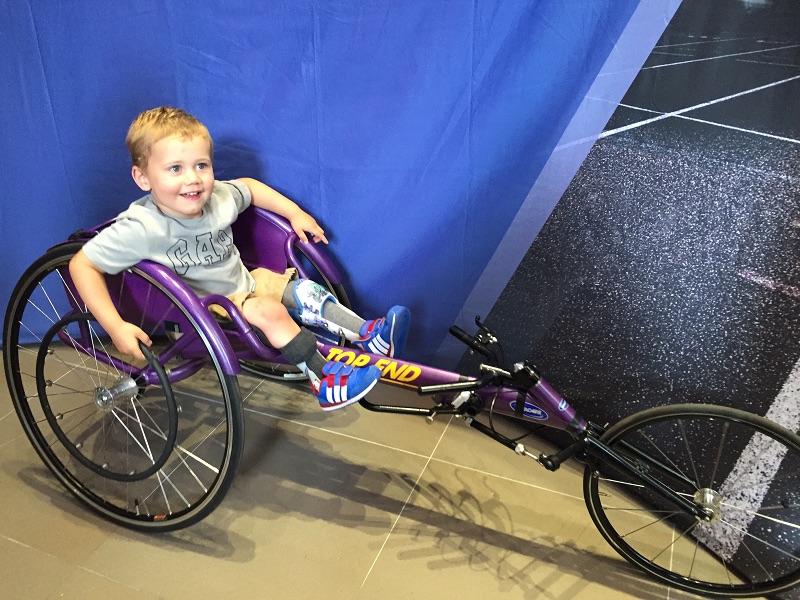 Born late in 2012, little Matt Knoesen might not have been around during the London Paralympics, but that minor detail has been no barrier in what Lord Coe always described as “the Games that will inspire a generation.”

At just two and a half years old, National Paralympic Day and The Anniversary Games might not flood back the glorious memories of 2012 for Matt, but you won’t find many fans as keen as this young boy from Wimbledon.

Matt loves all sport, particularly if it involves “going fast!” He loves to drive or ride anything with wheels and to run (in his way) and play tennis and golf. In his words “I’m a par-ateeeeet” (para athlete).

This aspiring athlete, is not short of heroes and is desperate to meet wheelchair racer David Weir having already been inspired from meeting a long list of Olympians including Sir Steve Redgrave, Jessica Ennis-Hill, Usain Bolt and receiving a personal letter of encouragement from Chris Hoy.

It was actually around the time of the last Olympics when his parents were first aware of his spinal cord injury when mum Kerryn was 20 weeks pregnant.

A cyst that pushed against his spinal cord in early pregnancy and left doctors fearing the worst.

From the suggestion of termination, then amputation, then that he would never walk seeing Matt on his bike is a gift! pic.twitter.com/t2wzzirgkv

With sheer determination and support from mum Kerry, dad Gavin, and the community around him Matt is able to enjoy living the sporty and active life he was destined to have.

His mum Kerry said: “Para sport has inspired us as his parents from before he was born, knowing he would be born with club foot, and since – showing us that there are no excuses and no limits; and has completely influenced how we treat Matt.

“We treat him as if there is no difference between him and anyone else, that he is capable of anything in the world, and he will tell you himself that impossible is nothing! Matt responds to this and does more than most of his able bodied peers. Matt is the bravest and happiest boy we know and he is quite literally our hero!”

Matt has little use of his left leg and knee, and no use of either leg below the knee and is about to endure his 5th major surgery already in his short life. Between battling medical appointments, Matt will no doubt give every effort to fulfill his dream of becoming a Para-athlete.

Already making enquires about WheelPower’s Primary Sport Camp and events to try wheelchair sport, perhaps the motto inspire a generation Lord Coe was tailored made for stories like Matt’s.

WheelPower’s Sports Development Officer Stewart Jeeves said “It is great that young Matt is so keen to get involved in sport, and we hope to see him participate in lots of our wheelchair sport opportunities in the future.”

WheelPower is the national organisation for wheelchair sport. We introduce disabled people to sport as a positive lifestyle choice following injury or illness. We are a Registered Charity based at Stoke Mandeville Stadium in Buckinghamshire, the birthplace of the Paralympic movement.

Find out more at www.wheelpower.org.uk

The pioneers of disability sport