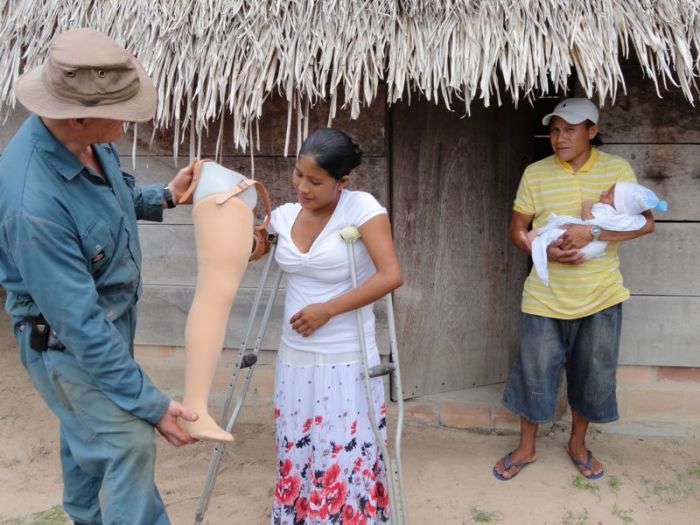 A South American woman has been given a “new beginning” in life after The London Prosthetic Centre constructed a new leg for her.

Pearly Isaacs lost her right leg at the age of 11 after she was attacked by a rattlesnake when working on her family’s farm land.

Her grandfather saved Pearly’s life by using traditional bush medicine and tying a tourniquet around her leg to stop the poison spreading, but this resulted in the amputation of her leg.

At the age of 16 Pearly, who comes from home in the North Rupununi District in South West Guyana, South America, was fitted with an aluminium limb, but she soon outgrew this and it became painful for her to walk on it.

At the beginning of this year Pearly, who is aged 24, lost her first born child four weeks after giving birth, she was left devastated. Soon after this tragedy Pearly met forestry worker John Home, who was moved by Pearly’s bravery and offered to help her obtain a new leg.

He constructed a leg, from titanium, which would have cost £8,000 to buy.

Pearly has since been fitted with the leg and says it has transformed her life. 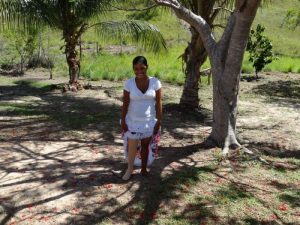 She explained: “Sometimes I can still hardly believe what has happened to me. For years I have struggled with a metal leg. It became painful as I grew older but I had no way of changing my situation. My heart was broken when I lost my child and I found it hard to face life. When I met John and he offered to help me I did not see how he could. But he did more than I could ever believe. When I was fitted with my new leg it took me a while to get used to it. I feel as if my life has been restored. What makes my heart gladdest of all is that people who had no reason to help me have changed my life forever.”

Pearly says that she thanks God every day for the two men that have changed her life. She has written to the clinic to express the depth of her gratitude.

Mr Home said:  “I find it hard to put into words what I felt when I saw Pearly walk on her new leg for the first time, her smile was brilliant to see it was incredibly moving. It was a privilege to help her.”

Mr Haidar added: “I was given a little bit of information about Pearly and the struggles she faces in life. I felt that it was our duty to do what we could. Making a limb for someone I have never met presented us with an interesting challenge, which I am glad to say we met. No compromise was made on the quality of the prosthesis that we made for her. It is very strong and will last for around ten years. It has a titanium structure which supports Pearly as she walks. To receive Pearly’s letter is very touching and a reminder of the necessary work we do.”

Find out more about the London Prosthetic Centre at thelondonprosthetics.com