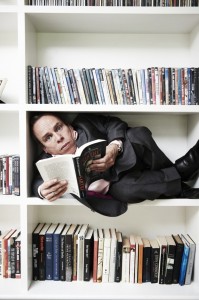 Having starred in the Harry Potter films, the Star Wars series, Willow, The Hitchhiker’s Guide to the Galaxy, Labyrinth, Leprechaun and Prince Caspian to name just a few, it could be said that Brit actor Warwick Davis is a Hollywood giant. Ironic really, given that he’s just three feet and six inches tall.

Warwick was born with spondyloepiphyseal dysplasia congenita (SDC), a condition affecting the growth of the body, neck and limbs, but usually leaving the hands and feet average- sized. What Warwick ‘lacks’ in height, however, he makes up for in personality and talent. He’s probably the most recognisable person of short stature in the world of acting. His movies have attracted more film fans to cinemas worldwide than superstar Will Smith.

“I don’t come across many things where I think: ‘I can’t do that’,” he says. “I suppose growing up as a little chap and being half the size of my peers, that presented its own challenges. School did too. But I always
overcame them.

“I think my mum and dad instilled that in me. If I was at home and I wanted a book from a shelf or whatever, I could say: ‘Dad, can you pass that book?’ But that was never my way. They’d often come into the room and find me balanced on a bookshelf!”

This can-do attitude is exactly why Warwick’s acting career has been such a success. And his most recent project has been his favourite to date. For the past year, Warwick has been working on the new Ricky Gervais and Stephen Merchant-penned BBC Two comedy, Life’s Too Short. The six-part series takes the form of a ‘mockumentary’, following the life of showbiz dwarf Warwick Davis.

“A fictionalised version of Warwick Davis,” Warwick quickly points out. “Warwick in Life’s Too Short is a bit of a monster really, he’s got a chip on his shoulder – a small man complex basically.

“[The show begins] at a point in Warwick’s life where things aren’t going so well. He has a huge tax bill, he’s going through a divorce and his career’s on the slide. He’s actually using the documentary as a way of helping pay his tax bill and also trying to kick- start his failing acting career.”

The idea for the show came about when Warwick made an appearance in the Ricky Gervais comedy series Extras. Chatting behind the scenes, Gervais was captivated by tales of Warwick’s career and life as a short person. Before long, Life’s Too Short was born.

As would be expected with Gervais’ and Merchant’s unique brand of humour, the show doesn’t tiptoe round Warwick’s height. In fact, it’s the source of a lot of the laughter that comes from the series, but it’s not achieved via a tirade of “short jokes”. Are Gervais and Merchant trying to point out that, sometimes, disability can have a funny side?

“Absolutely. And that’s what Ricky and Stephen do so well,” Warwick says enthusiastically. “I don’t think I would’ve felt so comfortable with any other writers and this subject.

“[Ricky and Stephen] have a great respect for the material, for me and for disability. Look at their past work. In The Office, they had Julie Fernandez, who uses a wheelchair. The way David Brent deals with her, wheelchair users were thinking: ‘Brilliant! Finally someone realises how people act like idiots around us. Not only do they treat us like we’re somewhat simple, but you’re moved around where you don’t want to be’. They kind of highlighted that. The joke isn’t about the disabled person, it’s about the attitudes of other people.”

As well as bringing disability into the spotlight, Life’s Too Short has also given Warwick his first lead role in a comedy, something he’s very excited for TV viewers to see.

“It’s what I’ve always wanted to do. I love comedy, but I’ve never had the opportunity,” he says. “I’ve always had a desire to play a character who didn’t need to be covered in prosthetic make- up! Going into work, putting on a nice suit that’s been tailor-made for me, having great fun and getting to play a major character that’s been written for me – it was hard work, but it really wasn’t like a job. It was the most fun you could ever have.”

Not only is Warwick in a lead role, but he acts alongside some A-list stars. Johnny Depp, Helena Bonham-Carter, Sandra Bullock and Sting are just a few of the big-name celebrities who were enticed by Gervais to stop by for cameo appearances in his latest project.

“I’ve had a lot of great opportunities,” he says. “Sometimes, I’ll flick through my CV and I’ll think: ‘Wow. I’ve been really lucky’. Writing my autobiography – Size Matters Not – I really did take stock of what I’ve done with my life.”

One of Warwick’s greatest achievements is his family. He met his wife Samantha on the set of Willow, where she was an extra. Samantha has achondroplasia, the most common cause of dwarfism; as do their two children, Annabelle, who is 14, and eight-year- old Harrison. They live together in their Peterborough home.

“When I’m not working, we [as a family] spend a lot of time together, play board games, have movie days, shut the doors, catch up… Just the most mundane normal existence you could ever imagine.

“But then we have this other life outside of those four walls – events and premieres and that sort of thing, which we all really enjoy and relish
but we also love the times that we spend together doing normal things, like homework. It’s really mundane and normal. Weekends are a precious time in our lives so we spend them together doing our thing.”

GIVE IT A GO

Evidently, disability hasn’t been something that’s stopped Warwick from achieving his goals. So what advice would he give to other disabled people when it comes to chasing their dreams? “Acknowledge who you are and your situation and find how it can be positive,” he says firmly. “Accept the challenges that you come across, the things that you want to overcome, and push through. Don’t let things stand in your way.

“Years ago I did a show for BBC Three called Celebrity Scissorhands for Children in Need. I was asked to do it and I thought: ‘I can’t cut hair, I can’t reach!’ And then I thought: ‘Hang on. I want to inspire people. Yes, it’s ridiculous. It’s going to be very difficult for me to cut hair but, with a stool, maybe I can do it’. So I went on the show, and got on really well. Afterwards, I did get letters from people saying: ‘That inspired me to go and have a go at what I wanted to do,
stuff I’d never thought of before’.

“People believe that they’re limited by their particular disability or just their minds. But just get out and have a go. The worst that can happen is that you can’t do it. Then move on to the next thing.”