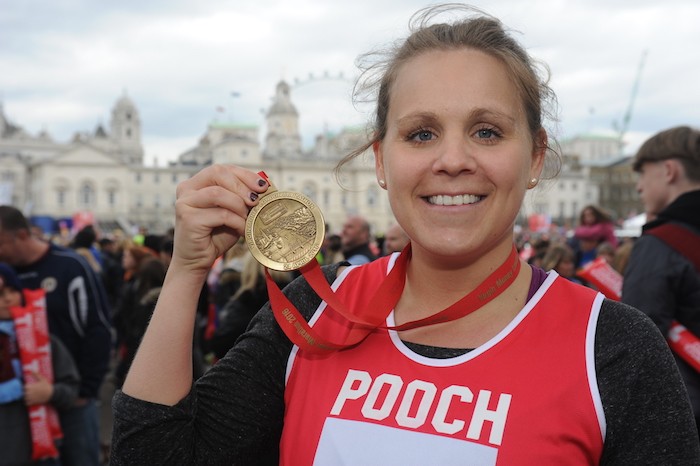 Andrea Poore with her medal

London marathon runners representing Leonard Cheshire Disability are set to have raised a whopping £190,000 between them this year, making a huge difference to the support the charity can provide in 2016.

A total of 80 runners pounded the streets of the capital on Sunday to support Leonard Cheshire’s vital work for disabled people in the UK and abroad, with friends, family and the Leonard Cheshire Disability team cheering them on throughout.

Nick Stretton from Sutton Coldfield took the fastest time of the runners, completing his first marathon ever in just three hours and one minute.

The 27 year old, whose father Geoff works for the charity said:

“I’ve had the opportunity to go see two homes in the West Midlands and see the great work Leonard Cheshire does on a daily basis. It was really quite a humbling experience. I’ve been really impressed at what they do. To others I would say definitely choose Leonard Cheshire as a charity to run for.”

The fastest female runner, Lena Belz, finished in three hours 25 minutes- despite it also being her first marathon.

She said: “I always run past the [Leonard Cheshire] home in Chislehurst, so I thought it would be good to run for somewhere I have a local connection to. I started training in January, going for a long run four times a week. It’s a big thing to put yourself through, and your family and friends, because you are a real party pooper for a few months, always training!”

Nicky Ashwell, who has the world’s most lifelike bionic hand, was celebrating completing her seventh marathon at the weekend.

Nicky’s marathon efforts made the media spotlight, with her giving interviews to both the BBC and London Live.

She said: “Mile 22 was tough, but I didn’t hit a runner’s wall really, I got off easy this time.”

Also amongst the 38,000 people taking part was Leonidas Leonidou, who had come from Cyprus to raise money for Leonard Cheshire. He was running as part of his ambition to take on the Abbot World Marathon Majors (Tokyo, London, Boston, Berlin, Chicago and New York marathons).

He said: “Thank you to Leonard Cheshire for helping me to fulfil my dream.”

A lot of runners were raising money because Leonard Cheshire cares for their loved ones, including Jack Rich from Greenwich.

He said: “I’m running for Leonard Cheshire because they do a fantastic job looking after my dad at Agate House in Bedfordshire and through him being there I’ve heard about all the other fantastic work they do up and down the country and all over the world.”

He said he would advise anyone thinking of raising money for Leonard Cheshire next year to “absolutely do it”.

“The charity provides help with training, fundraising, [and gives] lots and lots of support both before the day and on the big day itself.”

Mike Sheldrick was running to raise money for an adapted bike at Gloucestershire House.

He said: “My auntie is quite severely disabled and seeing other people with disabilities made me think it’d be great to give something back so that people get additional support.”

Symonds House in Hertfordshire was lucky enough to have two runners raising money for it, with Yvette Marshall and Alison Whitehead bringing in close to £4,000 between them.

Grandfather Sean O’Reilly completed his second London Marathon since having a double heart bypass to raise £2000 (so far) for us.

As well as individual runners, one running couple were representing Leonard Cheshire. Partners Nina Fisher from Eltham and Andy Warling from Dartford completed the race as a duo in four hours 31 minutes. This follows their running a 10K race together and taking part in triathlons as a couple.

Andy said: “We’d done the smaller events and then I said something stupid like, shall we do the London marathon? And we signed up for it.”

The team of committed runners were joined by Leonard Cheshire Disability chair, Sally Davis, who went to the start line to meet everyone, before heading to the Greenwich cheer point and then to the Leonard Cheshire reception afterwards.

She said: “I would like to express an enormous thanks to all our runners for their months of training and tremendous commitment to raising money for Leonard Cheshire Disability.

“It was wonderful to meet so many of our supporters on the day, to be part of the great atmosphere at the start line and hear the many personal stories that brought so many to the race this year.

“The efforts of all our runners will make a huge difference to so many disabled people and I am extremely proud to represent a charity that holds such an important place in so many people’s hearts.”

Trustee Alastair Hignell was also in attendance and said: “Marathon day is fantastic; it’s a really great experience. To be here as part of Leonard Cheshire is an extra special feeling.

“Leonard Cheshire is so important to so many people and I’ve spoken to people who’ve run here for specific homes and centres. When you come to an event like this and see the hard work the marathon runners put in and the joy and the support their family bring to them, it’s a really, really great experience.”

Runners who came to the Leonard Cheshire reception were also joined by GB Athlete Iwan Thomas, who congratulated everyone and posed for photographs.

If you’d like to take part in London marathon 2017 to raise money for Leonard Cheshire, early bird places are £75 and you can sign up now.

Autism centre opened by HRH The Countess of Wessex