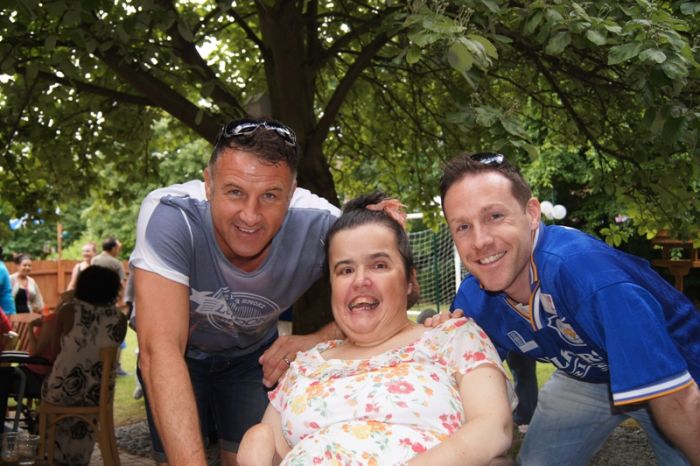 The former Leicester City FC Captain was the guest-of-honour at Gilmorton, a supported living service in Leicester, which supports 13 people who have learning disabilities, autism and physical disabilities to live independently in the community. The service held the special World Cup-themed event to mark National Learning Disability Awareness Week.

At the event, Steve toured the service and met people who are supported by Community Integrated Care in Leicester – signing autographs, playing football with them and answering their questions. He also officially reopened the gardens at Gilmorton, which have recently been redeveloped with the support of local volunteering group Leicestershire Cares and car dealership Ford and Slater Fiat.

Steve was also interviewed at the event by Emma Warne, 48, who lives at Gilmorton, for a special video which can be seen on the Community Integrated Care website – www.c-i-c.co.uk.  In the video, Emma asked Steve about his time at the service, his thoughts on Leicester City’s Premier League hopes and his World Cup tips.

The event was the first of a long term partnership planned between Community Integrated Care and The Steve Walsh and Muzzy Izzet Soccer Academy, a community football academy ran by the ex-Leicester legends. Together, they are currently planning a programme of football training for people with learning disabilities, as well as a unique inclusive football game, which will take place in 2015 and see former Leicester City legends – including Steve Walsh and Muzzy Izzet, play alongside local people who have learning disabilities.

Adam Wells, Community Integrated Care’s Regional Manager for East Midlands, said, “We were delighted to welcome Steve Walsh, who is a hero to so many of the people we support, to GIlmorton. National Learning Disability Awareness Week is all about celebrating the successes of people with learning disabilities and championing their right to be part of mainstream society, and Steve helped us to do this on Saturday.”

He continues, “Football is so important to many of the people we support, so for them to spend time with one of Leicester City’s greatest ever players was a dream come true. Steve spent time getting to know everyone we support, learning about their lives and answering their questions. We’re looking forward to working with Steve again in the future on other inclusive football initiatives.”

Speaking at the event, Steve Walsh said, “It has been fantastic to support Learning Disability Awareness Week with Community Integrated Care. Today has really opened my eyes, seeing the fantastic work they do at Gilmorton.  I do a lot of work in the local community, so I really enjoyed learning about how the people who live here are supported to enjoy independent lives.”

Community Integrated Care is one of the UK’s biggest social care charities. The charity supports over 5000 people across England and Scotland who have learning disabilities, mental health concerns, autism and age-related needs – like dementia. It supports hundreds of people across the East-Midlands. Find out more at www.c-i-c.co.uk

The power of community care this Carers Rights Day

Celebrating gold with tea and cake